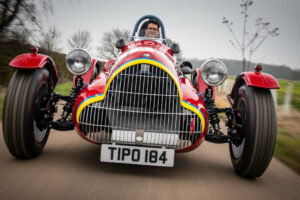 Inspired by classic Grand Prix racing cars, Darren Collins has created a model that faithfully recreates the originals, but with a twist – it’s actually a kit car based on an MX-5

Ever fancied channelling your inner Fangio or Farina? You know the vibe. A short-sleeved polo shirt, leather flying helmet and goggles, sitting bolt upright fighting with the wheel of a blood red fifties Alfetta or Ferrari Grand Prix car. It could be Monaco or Monza. The glamour, the noise, the danger. Those were the days…

And they still are, here in Bishop’s Stortford, Herts, in March 2022. Don’t laugh. I may not be resplendent in Fangio-style polo and headgear – it’s too bloomin’ cold – but I am certainly bolt upright behind a four-spoke, Titanic-sized steering wheel, with a gearbox between my legs, staring down an impressively long and sleek, blood red bonnet, out of which an exhaust manifold sprouts, suggesting an eight-cylinder powerplant, ready to wrestle with a single-seater GP car from a bygone era. Well, sort of, because not all is quite as it seems.

Welcome, to the Tipo 184, a homage to, and an evocation of, the Grand Prix Alfetta and Alfa Romeo 158 from the 1930s to the 50s, as raced by aforementioned heroes like Giuseppe Farina and Juan Manuel Fangio. Welcome also to one of the best and most well thought out kits that we’ve seen for some time. A kit? Yes, a kit!

Outrageous – and perhaps for some, it gets worse. The long and the short of this magnificent machine, part-created by Dowsett Classic Cars, is Japanese, rather than Italian. Underneath the evocative exterior is the beating heart and running gear of a perhaps slightly less evocative Mk2 Mazda MX-5. So, no straight-eight then.

The longer bit involves TV ‘Wheeler Dealer’ and ‘Master Mechanic’ Ant Anstead. He is co-owner of Dowsetts and inspiration for the Tipo 184 came from his Alfa 158. It was built firstly for a charity classic face- off between Anstead and his Wheeler Dealer colleague, Mike Brewer, and then a rather more bespoke replica for his Master Mechanic show on the Motor Trend channel. That build involved an MG TD chassis packing a contemporary 2.0-litre Alfa engine, and was sufficiently authentic to sell for $100,000 (£75,000) at Barrett Jackson’s Scottsdale auction in America last year.

Neither was built with a kit car application in mind, but with so much of the hard work and inspiration nailed – including bodywork mouldings – it seemed rude not to create a buildable version, for the home spannerist.

Anstead’s partner in crime at Dowsetts is engineer Darren Collins, and he is on hand to talk us through the whole build, with the aid of a fully built-up chassis and the blood red prototype, which has just gained full SVA approval, so is now road-legal. Imagine that. And plans for a race series are afoot, too, but more of that later…

Dowsetts and Collins prove to be one of those fascinating outfits with much going on – and much we’d love to be able to talk about, but have been sworn to secrecy for now. Crucial to the whole operation is Darren, whose evident engineering talent is passed down from parents who both worked at Rolls-Royce. In the seventies and eighties he messed about with Beetle- based kit cars and then embarked on a career with the Royal Navy as an engineer. Post Navy, he too worked at Rolls-Royce, before Anstead and Dowsetts beckoned, and stints behind the scenes on Wheeler Dealers and other TV car shows, making the ‘magic’ happen.

Given the monkeys cast from brass outside, we’re grateful for the warm workshop chassis walkaround. First impressions are of quality and length. It’s not a perfect-size replica, but Grand Prix cars of the era were pretty big, and that’s OK, because the Tipo 184 needs to accommodate drivers of all sizes, including my lanky limbs.

And quality? The tubular chassis is really rather well done and authentic-looking, with its grey finish and built-in MSA- approved roll cage. Although the Mk2 MX-5 might not be glamorous, it’s an inspired and plentiful choice of donor car, and Darren, Ant and Dowsetts have made the most of its parts-haul potential, with impressive ‘waste not, want not’ sustainability. Oh, and it’s cheap too, with decent cars starting at around £1,200 and rusty write-offs, with healthy running gear, being almost given away.

Key to the MX-5’s donability is the ease with which that running gear can be removed and transferred to the Tipo 184. Front and rear subframes unbolt and typically house the wishbone front suspension, steering, brakes and rear diff. They bolt straight onto the Tipo chassis, with just six and eight bolts respectively. And that’s it, the Tipo is ready to roll. Of course, most – if not all – enthusiastic builders will take the chance to refresh, blast, plate and paint the components but, nonetheless, this is plug and play, Ikea- type stuff. A 200-hour build is realistic, reckons Darren.

Pluck the engine and gearbox out of the donor, and they bolt straight onto the Tipo chassis engine mounts; a supplied propshaft connects front to rear. The MX-5’s pedal box is already split, so mounting either side of the transmission tunnel is a doddle. Most of the steering column is utilised, with an additional section supplied. The wiring loom is retained and any redundant sections can be removed. Even the Mazda’s instruments are retained and sit neatly behind the aluminium dash panel.

Bespoke components are actually few. The custom-made radiator is an obvious requirement, as is the fuel tank. The wire wheels are clearly essential for the ‘look’. The skinny, tall-of-profile crossply Blockley tyres are again a must and are kept on the tarmac by unique GAZ coilover dampers. Inside there is that lovely wood-rimmed, four-spoke Mota Lita steering wheel and singular, leather bucket seat. Also among the bespoke features are the billet-machined gearlever and mechanism that sit snugly to the cockpit’s right, single-seater style, arching over your right leg so you can operate the central shifter rod. It’s beautifully engineered and the only way to achieve the central driving position that also necessitates that aforementioned ‘gearbox between legs’ driving position. In Fangio and Farina’s day, it wasn’t unusual to have the gearlever itself sprouting from between one’s legs. Think about that, without crossing them.

All in, the Tipo 184 weighs 750kg, which makes it lively enough, with 140bhp’s worth of 1.8-litre twin-cam, 16-valve power. And of course the Mazda unit is endlessly tuneable, with up to 200bhp possible via cams, throttle bodies, even turbo conversions, albeit at a price.

Talking of which, there are many ways to buy and build. A complete, fully built Tipo, just like this one, costs £60,000. You could go all-in kit-wise at £19,995, which will give you everything needed for the build, or go gradual, sourcing your own donor and buying your bespoke parts stage-by-stage. Darren is on hand via YouTube, with a full build video too.

Whatever option you pick, the bodywork and chassis are delivered in a large, liveried wooden crate. The kind you might expect to see transporting some museum antiquity, which the Tipo 184 kind of is. It’s a stylish touch.

So, time for a drive then. And while the Tipo 184 has passed its SVA and is fully road legal, Swansea has been dragging its tootsies with the paperwork, so it’s a brisk drive on the private roads around Dowsett’s farm. Not to worry; the potential and grin factor are immediately apparent.

Clambering in requires a bit of practice: right foot on the top suspension arm, pivot with left foot on the small cockpit-mounted footplate and hop in. With a bit of practice, you’ll be doing it just like Stirling Moss. Then it’s flick the toggle master switch for ignition, and push button to start. The exhaust manifold might be telling porkies, but it sounds suitably raspy, as opposed to a standard MX-5, which sounds largely of nothing at all.

The clutch is standard in weight, while that ingenious gear linkage slots in to first with finely engineered precision. A blip of the throttle and we’re off on our way, with a hand on the enormous, near-vertical steering wheel, which makes light work of pointing the skinny Blockleys.

The centre of gravity is high, as is the driving position, with that perched and commanding view all the way down that rocket-like snout. Performance is brisk and a loss of traction on a near-freezing morning is not difficult to provoke. The legs-akimbo driving position might be a bit on the ‘manspreading’ side, but in a single-seater there’s no chance to offend and if that’s how Fangio and Farina did it, then that’s good enough for me. And it all works. Odd it may be, but there are no issues with the MX-5 running gear, which functions perfectly in its new environment.

It would have been interesting to take the Tipo out onto a main road and it would make for an incredibly invigorating drive, albeit one that would perhaps fall into the category of an occasional treat; the aero screen would require goggles at the very least. But hey, some folk love that sort of thing and it’s no madder than a Morgan 3 Wheeler, or a de-windscreened Caterham. Whatever, it’s a brilliant, seat-of- your-kecks, plenty fast enough, sausage-shaped package of fun. Which is what recreational driving should be about.

And then there is the original idea of creating a one-make race series. How much fun would a pack of these things be? Lowish cost, lowish power maybe, but equally low grip. Just imagine a wet race, with 20-odd cars in a Fangio-style four- wheel drift? Indeed, colleagues that have driven the Tipo 148 on a wet track report thrills, spills and almost telepathic driftability. Oh, and Darren mentions the possibility of different bodystyles too: a Maserati 250F, a Lancia D50 or Ferrari, or even a Vanwall. Why not?

The BRSCC (British Racing and Sports Car Club) is on board and the plan is for a series of track days in 2022, culminating in a standalone Tipo 184 race at the scenic Cadwell Park circuit on the weekend of 23/24 October.

With a good few cars sold already, it’s not hard to see this happening. I wonder if they might be considering a guest-driven car? I’d certainly dust off my goggles for that!

If you’re looking to buy a classic car, read our guide on future classics…