Home » Car Reviews » This US State Has World's Most Expensive Toll Road: Report

This US State Has World's Most Expensive Toll Road: Report 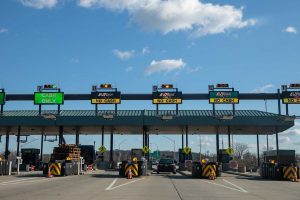 Before diving too deep into this look at toll roads around the world, a disclaimer is necessary. The information comes from Australia-based Budget Direct, which concedes that it may not have all the latest, greatest information regarding highway costs around the globe. As such, think of this more as a general guide versus strict gospel. Still, even if the stats are merely close, it’s eye-opening.

Actually, it may not be eye-opening for folks in Pennsylvania. According to Budget Direct’s report, the Keystone State is the costliest place not just in the US, but in the entire world when it comes to a toll road. Interstate 76 – AKA the Pennsylvania Turnpike – is an east/west highway spanning the state, and if you travel its entire length of 360 miles, it will allegedly cost you $112.91. We say allegedly because turnpike officials claim the cost includes an extension running north from Philadelphia which “nobody” would take on a state-wide journey, according to a report from KDKA on the matter.

As such, KDKA reports a revised cost of $92 to traverse the state on the turnpike, excluding the extension from Philadelphia to Scranton. However, that figure still keeps Pennsylvania at the top of the costliest tolls list by a wide margin. Austria’s Grossglockner High Alpine Road ranks second on the list at $45.43, less than half the cost to travel through Pennsylvania on the ‘pike.

The Budget Direct study also looks at average toll costs by country, and that changes up the list dramatically. Switzerland checks in as the most expensive place for toll roads with an average cost of $26.52. Austria is a distant second at $16.31, followed by the Faroe Islands at $16.28, Croatia at $15.30, and Denmark at $10.75. Despite Pennsylvania’s best efforts, you need to drop all the way to the 11th spot to find the United States, which averages $5.38.

As for Pennsylvania, it’s true that cost for total distance doesn’t necessarily tell the whole story. Yes, the Pennsylvania Turnpike is 360 miles long and the money adds up over such a distance. By comparison, the Lincoln Tunnel in New York is just 1.5 miles long and costs drivers $16 to cross. However, compared to long-distance highways, Pennsylvania is extremely expensive at an average of 31 cents per mile. The 241-mile Ohio Turnpike comes in at 8 cents per mile, while the New York State Thruway – the longest toll road in the US at 496 miles – is just 6 cents per mile.