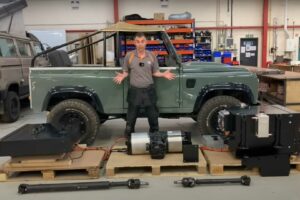 If you’re looking to convert your aging and possibly fume-spewing Land Rover Defender to run on electricity, this kit from Electric Classic Cars seems like a great way to go. It has been designed to basically bolt straight into an old Defender, although you can’t buy it yourself and instead have to search for a shop that will do the conversion for you.

Electric Classic Cars is currently not selling this kit to private individuals, only to companies that have the means to perform the powertrain swap from ICE to EV. They do intend to offer a version that will be designed for home installation, but they didn’t say when it would be available.

The kit is comprised of a Tesla large drive unit out of a Model S or Model X, which makes 450 horsepower, or 650 horsepower if you opt for the performance version. With the latter, a Land Rover Defender is apparently able to sprint to sixty in under 3.5 seconds, making it several times quicker to accelerate than any factory gas-burning variant.

The 100 kWh battery pack from Tesla also makes its way into the kit, although not as a single unit. Around 60 percent of the pack is under the hood and there’s a smaller secondary pack in the rear of the vehicle (around where the fuel tank used to be). This is apparently good for a real world range of 150 miles (240 km), which is pretty impressive given its shape and the kind of wheels it runs.

One big change that this project has over other similar conversions is that in this case, the vehicle runs a direct drive system with the simple reduction gearing that is built into the motor housing. There is no more transmission, so no more low and high range to switch between depending on terrain conditions.