Home » Car Reviews » This Student Design Concept Was So Good, Lincoln Made It Real

This Student Design Concept Was So Good, Lincoln Made It Real 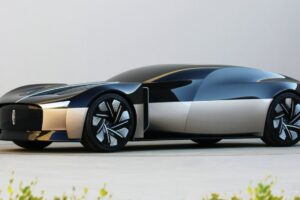 Last year, Ford partnered with the ArtCenter College of Design in Pasadena, California, and tasked some of its students with envisioning the “automotive experience” of 2040. Whatever the students decided to create had to embody the four tenets of quiet flight: beauty, human, glide, and sanctuary, all while telling a wholesome human story.

If this sounds a little froufrou, it’s because it definitely is. But then, so are most concept cars. Our advice would be to just evaluate the project on its results: a set of four stunning-looking concepts, each from a team of students with their own take on what future Lincolns might look like. The concepts the teams built not only had to embody the principles of quiet fight, they also had to be shared, connected spaces and manifest as autonomous, electric vehicles.

What you’re looking at is the otherwise unnamed work of “Team Anniversary.” It’s a sleek four-passenger concept that Lincoln liked so much, it took the design from sketch to reality.

If this is the future of Lincoln’s design, we’re not too upset about it. Svelte lines, an aggressive stance, and real presence on the road are characteristics that Lincoln sedans like the Continental, Zephyr, MKS haven’t embodied. Instead, Lincoln’s recent SUVs have done a much better job of extending the brand’s appeal. The nameless concept that Team Anniversary put together more than embodies the brand’s old mantra of being “what a luxury car should be,” and we sure hope Lincoln hires whoever designed this sleek concept.