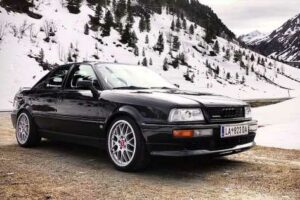 When it comes to special versions of the B4 Audi 80, the S2 and RS2 hog pretty much all the limelight. Perhaps as a consequence, one limited-run 80 curio has found itself largely forgotten over the years.

Said car is the 80 Quattro Competition, of which Audi made 2500 to homologate its Super Tourenwagen Cup racer of the same name. Formed from the ashes of the original Deutsche Tourenwagen Meisterschaft, the first year of the STC saw the 80 compete against race-prepped versions of the E36 BMW 318iS, Ford Mondeo, Nissan Primera and more.

German driver Frank Biela got off to a storming start that year in ROC Competition’s 80, winning three out of the first four rounds. Ultimately, Johnny Cecotto, a Venezuelan who dabbled in racing on two and four wheels, bagged the championship in a 318iS.

By that point the 80 was being replaced by the A4, giving Audi a starting point for a new STW racer, making the Quattro Competition as similarly short-lived as the bonkers 90 IMSA GTO from a few years prior. Arguably, this makes the road-going version all the more interesting.

Along with a 136bhp 2.0-litre 16-valve inline-four, Audi gifted the Quattro Competiton homologation car with front and rear bumpers borrowed from the S2, headlights usually found on the V6 80, and a new rear wing. Neat touches, but not quite enough to make the QC a car that many would have wanted to keep alive at all costs. As such, you’ll be hard-pressed to find one these days.

Gabby spent the next two years comprehensively stripping back and rebuilding the 80, respraying it in its original colour for good measure. With the exterior sorted, attention turned to the engine. 136bhp might have seemed a reasonable output in 1995, but in the 2020s, that just doesn’t seem to do justice to the way the car looks.

The answer came from a 1.8-litre turbo engine from a B5 A4. Granted, [VW Group’s 20-valve four-pots aren’t the easiest things to work on] (https://www.carthrottle.com/post/why-ive-given-up-fixing-my-soul-destroying-mk1-audi-tt-bam/) (they have a cambelt and a cam chain), but producing 178bhp in its standard form, this lump gave Gabby’s 80 a much more fitting output. Before going in, the four-pot was rebuilt with strengthened internals. Gabby was also careful to ensure the engine bay looks original at first glance – no nasty plastic engine covers here.

With a background in car body repair, Gabby was ideally placed to take on the whole project himself. The main cost of the build was time – the 24-year-old estimates he’s sunk over 600 hours into the 80 Competition. “I definitely earned a ‘built not bought’ sticker,” he concludes. Hard to argue with that.