Home » Car Reviews » This Oldsmobile Has 5,000 HP And Is Somehow Still Street Legal

This Oldsmobile Has 5,000 HP And Is Somehow Still Street Legal 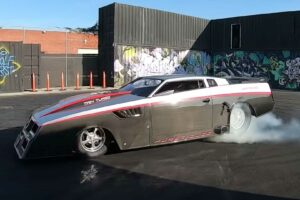 In a conversation about muscle cars, the Oldsmobile Cutlass Supreme of the ’70s and ’80s will always be included. Most especially if it went through the hands of Hurst Performance. The 1984 Hurst/Olds is one of the finest examples out there, and that’s exactly what we have here, featured by YouTube’s Hoonigan.

But if the Olds above doesn’t look familiar to you, that’s quite expected as it’s a heavily modified example called the Sorceress. How modified, you ask? Well, it can now produce over 5,000 horsepower with the right fuel – way more than what an old Hurst muscle car could produce. It’s now claiming the title of America’s fastest streetcar.

We mentioned “right fuel” as that amount of power is achievable when the Sorceress is fed with methanol. Apparently, this car can even digest 88 octane gasoline but of course, the output won’t be the same.

Powering this Oldsmobile is a V8, complete with a pair of 110mm turbochargers and 2.5-inch primaries. The engine bay looks insane, with stainless steel hardware polished to look nickel-plated. Even the way the clamshell hood electronically opens looks like a piece of art.

If you haven’t noticed, much of Sorceress’ exterior is made from carbon fiber, so it’s definitely lightweight. This allows the car to sprint up to 260 miles per hour (418 kilometers per hour) in a quarter-mile, finishing so in around six seconds. That’s even quicker than a Bugatti.

A lot has changed from this 1984 Hurst from when it was bought brand new by the owner, but one thing remains – it’s still his daily driver. Yes, despite that ridiculous amount of horsepower it possesses, it’s street-legal. Just how cool is that?