Home » Car Reviews » This Is The Future Of EV Technology…Maybe 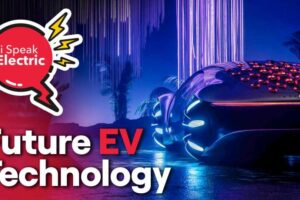 EVs are evolving quickly, so what will the future of EVs look like?

Hello and welcome to another edition of I Speak Electric on Best EV. Today we are peering into our crystal ball and trying to predict the future of EV technology! It’s going to be tough, let’s face it. But at least we can have a bit of fun trying.

Now there’s no way we’re going to cover it all today so we’ll take our pick of a few topics and get stuck into some details.

It’s impossible to predict how much and how fast range is going to improve. Only ten years ago, the first modern mass-produced EVs such as the Renault Zoe was coming on stream. And we were seeing a range in these cars of around 100km. Although this was plenty to do most people’s daily commute, it wasn’t hugely impressive.

Fast forward to 2021…we’re being given some cars that will easily pass 400km, and in favorable conditions go above 600km. You have to think that we may well see the 1,000km mark reached at some stage in the not-too-distant future.

Other modes of transport

So far we’ve only talked about cars. But as we all know, the car isn’t the only means of transportation. Now, it seems to be in the world of private transportation that the most advanced EV technology is being fostered…just take a look at how Tesla has driven this on.

It seems the future of EV may include all forms of transport.

We’ve touched on charging our cars in this video already and how that might change, but we didn’t mention where the power is going to come from. This is something that is changing rapidly.

Microgrids and self-sufficiency will be more widespread. People will increasingly have solar panels fitted to their roofs. Shopping centers and schools will have solar fitted and can charge cars with the excess energy produced during the day. Only time will tell how far advanced this becomes, but it’s an exciting period in history.

Well, it’s been fascinating to take a look into the future like that! But also incredibly difficult…I mean just look at the pace of change over the last decade. So it’s next to impossible to accurately predict what type of cars we’ll be driving in 10 years’ time.

We’d love to hear from you. Have we over, or under-estimated any technology today? What future EV technology are you most excited about?