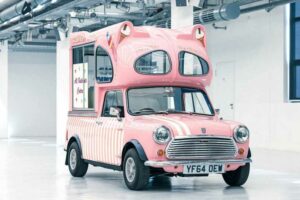 In September 1960, the Mini Pickup went on sale, and it’d eventually become the platform of choice for Cummins Ice Cream Vans. One has found its way into BMW Group Classic’s heritage collection, and it’s downright adorable.

Cummins started producing the vans in the 1970s. The conversion removed the pickup’s roof and the rear cab wall, opening the interior to the bed. A custom top with big, bulbous windows and big sliding doors turned the truck into an ice cream van. The bright pink paint job pops, adorned with “Lollies Ice Cream” over the front windows, delicious-looking decals, and a motif of “Tom and Jerry” on the back.

Cummins sold the vans in the UK and abroad, but they did not have long lifespans. Few are left, and maintenance costs can be prohibitive. There were other Mini Ice Cream Vans with different designs and implementations, but the bulging roof of Cummins’ design remains quite famous.

The van earned the nickname “Batmobile Mini” because of its bulging roof windows. Some apparently likened them to the batmobile’s double-bubble windshield from the 1960s “Batman” TV show. You can be the judge of that.

In 1998, Whitby Morrison, another ice cream van maker, acquired Cummins, but that didn’t put the Mini Ice Cream Van on ice. Whitby had made one replica for an unspecified company, and tapping into peoples’ nostalgia is a proven moneymaker.

The Mini Ice Cream Van is similar to the Mini Wildgoose, a BMC Mini van converted into a camper. It was available with one of three conversion kits, and the company offered it as a completed conversion. The camper came with four seats, a double bed, and cupboards. Power came from a 34-horsepower (25-kilowatt) four-cylinder engine.

The only photo of the interior shows off a tiny sink tucked up against the dashboard, which features a center-mounted gauge cluster and not much else. It has a small sink, but the Mini’s design made it much more accommodating than its small looks suggest. Companies have been modifying vehicles since the automobile first arrived, and we’re glad that a cute creation like this has been saved from the dustbin of history.