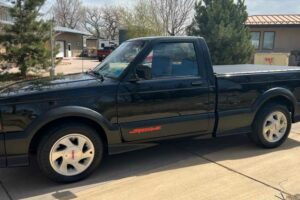 Directly on the heels of record-setting car and truck sales in Indianapolis comes Mecum Auctions’ big bid in Tulsa, Oklahoma, June 9-11. And, when it comes to performance trucks that will cross the block, this sweet 1991 GMC Syclone-Lot F123-is one rig we’re really interested in following.

Our focus on hot-rod rigs at the auctions stems from a custom 1990 Chevrolet Silverado 454 SS pickup truck we featured, and a mint, all-original 1992 GMC Typhoon SUV, which were among the thousands of vehicles being sold at the Indy event.

Nestled amid the myriad Chevy C10s and “Bullnose” 1980-1986 Ford pickups that are typically found at Mecum’s auctions, this one-owner, all-original (save for an air-conditioning system that’s been converted from Freon to R134A refrigerant), heated-garage-kept, 16,000-mile, all-wheel-drive, turbocharged rig is available at no reserve.

Produced from 1991 to 1993, Syclone is the pickup version of Typhoon, GMC’s 1992-1993 sport SUV. Produced by Production Automotive Services of Troy, Michigan, fewer than 3,000 of these pickups were made.

This is an excellent one-owner survivor. And, in the wake of the Mecum experience in Indy, where a 1979 Ford F-350 with a Cummins diesel underhood pulled in $220,000, we cautiously say the proverbial “sky” could be the price limit when the closing hammer drops on this unit for the final time.

Under the hood is a turbocharged 4.3-liter V-6 engine making 280 horsepower (at 4,400 rpm) and 350 lb-ft of torque (3,600 rpm). The powerplant features performance hardware such as unique intake and exhaust manifolds, a dual-bore throttle body, multiport EFI, lower-compression pistons, special intake and exhaust manifolds, and a water-to-air-intercooled Mitsubishi TD06-17C turbocharger.

A four-speed automatic transmission is connected to a BorgWarner transfer case that distributes the engine’s might to all four wheels, all the time. At 3,599 pounds (considerably less than Typhoon), this powertrain propelled Syclone to sub-5-second 0-60 mph elapsed times.

The Syclone’s 16,000 original-miles engine is stock with the exception of an upgraded air-conditioning system. Gone is the hardware for R12 (Freon), replaced with more contemporary gear that supports using EPA-compliant R134A refrigerant. The fuel system is rejuvenated with stock-replacement pieces, and repops of the original Syclone decals and tonneau cover are now in place, but this OG sport truck is predominantly stock. It even rides on the tires it received at the factory.

With the exception of the steering wheel, cloth manual-lumbar seats with red piping, and similarly colored accents on the door panels, this GMC Syclone’s interior can easily be mixed and matched with pieces from a Typhoon’s cabin, as they’re the same.

This Syclone Is Always Ready to Play Hard

The 1991 GMC Syclone sits low to the ground, ready for spirited driving on pavement. Like Typhoon, the pickup is a street-only rig that was only available in black (although there were paint-color exceptions for two special-edition models that were built in the truck’s first year)—and this rig’s original finish still looks pretty good. Unlike Typhoon, Syclone has a self-leveling airbag suspension setup in the rear to help enhance the shocks’ performance.

The GMC Syclone Is Never Ready for Hard Work

Precision Automotive Specialties makes it clear that GMC’s Syclone pickup truck isn’t one for hauling a bed full of home-building materials (500-pound payload limit). Towing was a no-no, too. It’s built for hauling ass. Only.

For all intents and purposes, and with the exception of the rear air suspension, steering wheel and subtle interior differences—and, of course, a bed versus a hatchback cargo area—1991’s GMC Syclone is the template for Typhoons that followed a year later. The fascias, with their air dams and fog lights, are exactly the same.