Home » Car Reviews » This 1969 Daytona and 1970 Superbird Could Be the Ultimate One-Two Punch NASCAR Mopar Collection!

This 1969 Daytona and 1970 Superbird Could Be the Ultimate One-Two Punch NASCAR Mopar Collection! 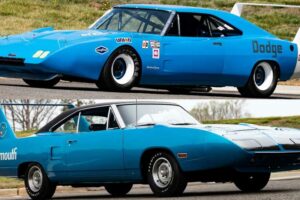 There are collectors and then there are collectors with really good taste. Ray Evernham most assuredly falls into the latter category. Evernham has been involved in racing for over four decades and has worked with names like Foyt, Andretti, Hendrick, Gordon, and Earnhardt. He helped resurrect the International Race of Champions (IROC) series and was a three-time champion NASCAR Sprint Cup crew chief for Jeff Gordon. He does NASCAR coverage and hosts several television shows, restores classic rides and old race cars at his shop called Big Iron Garage, and is a majority owner at JRi Shocks. Hell, the guy did the voice of Ray Reverham (get it?) in Pixar’s Cars 3 and is in the NASCAR Hall of Fame, so it’s safe to say he’s a car guy to the core. As such, he has an insane collection of hot rods and vintage racers of all types, and part of that collection is going up for sale at the 2022 Mecum Auctions event in Indy. Two cars in particular really caught our attention, a pair of Mopars that, while similar, are also very different. We’re talking about a race-bred Dodge Daytona and a Plymouth Superbird, cars that epitomize the big-wing era and the glory days of NASCAR racing.

The history of motorsport is filled with “firsts” and “bests,” but few Chrysler cars carry a heritage like this one. The Charger Daytonas of 1969 took many race wins, but this example was the very first car ever to officially top 200 mph on a closed circuit course. On March 24, 1970, at the recently opened Alabama International Motor Speedway (AIMS) in Talladega, factory driver Buddy Baker used it to set an official lap speed of 200.447 mph. That, however, is just the start of its history.

A Chrysler “Development Car,” this Dodge carries Serial No. DC-93. Rebuilt by Nichels Engineering from a Charger 500 press car, assembly of this aero-test car took place at the company’s “Woodward Garage” race shop, and was overseen by Bob Tarozzi at the direction of Larry Rathgeb, just as Charger Daytona development was getting underway. Authenticated by Chrysler Racing Engineer George M. Wallace on April 7, 2001, it was known in test documentation as “the blue car,” and was first driven by Paul Goldsmith in the 1969 Daytona 500 as a Charger 500 model before being converted to test use. Driven as No. 88, Charlie Glotzbach sat on the pole for the inaugural Talladega 500 in September, 1969, in DC-93, qualifying at 199.446 mph, itself a world record. As a result, Baker was tagged to drive DC-93 to deliberately attempt to top the 200-mph barrier six months later at the same track during a private test.

Among the other drivers of DC-93 were Bobby Allison, Dan Gurney, Bobby Isaac, and James Hylton, but the proven chassis was used longest by Iowa racer Don White in USAC Stock Car competition, driven for several seasons before it was retired in the mid-1970s. After extensive research, historian Greg Kwiatkowski located the car and purchased it from White in 1998. Eventually, the result was a comprehensive multiyear restoration to the condition you see here, performed by Ray Evernham and his team at Big Iron Garage in Mooresville, North Carolina.

Related: Bad-Ass Alert! Rare Photos of NASCAR Drivers from the Past

DC-93 was in use when the first tests of the actual Daytona Charger aero package took place at the company’s Chelsea Proving Grounds in July, 1969, attaining Wallace’s documented 205 mph. The Daytona package on DC-93 resulted in a zero-lift vehicle with a drag coefficient of 0.29, and further testing yielded many innovations used on future Chrysler circle track vehicles. This included directional fins to direct airflow to the radiator, underbody paneling from the nose to the K-frame for better aerodynamics, Chrysler’s first use of a dry sump in NASCAR, engine bars added from the shock towers to the firewall for chassis stiffening, and refined cowl air induction through the base of the windshield. The car is packed with innovation.

Exterior aero enhancements by Chrysler Engineering added a body raked to the chassis by 1.5 degrees and flared quarter panels in front of the rear tires for better aerodynamics, the steering gear attached to the K-member for better handling and more speed, and the entire front end “drooped” forward of the front tires for less drag. Inside is the race-based interior, the square fuel tubing seen on the right-side floor pan that was originally used to attach temporary data recording equipment, and an innovative rear axle cooler for better efficiency.

Painstakingly researched before a wrench was lifted, this accurate restoration includes a 426/575-hp Hemi EX-144 V-8 engine complete with a Holley Dominator carburetor on a bathtub Hemi intake, the car’s “Put a Dodge in your garage” front air plate, and period speed parts. It is backed by a four-speed manual transmission, and has period-correct body parts, paint, and racing wheels, as well as a Letter of Authenticity from George M. Wallace verifying the provenance of DC-93.

A truer icon of superspeedway development and success would be difficult to find. The car was used to develop the first Charger Daytona, attended the controversial first Talladega superspeedway event, topped the 200-mph record and was then hidden for decades—this is the one and only DC-93 No. 88.

This historic 1969 Dodge Daytona Hemi Racer is going up for sale Saturday, May 21, so if you have the coin and want to add something special to your collection check it out at the upcoming Mecum Auctions event in Indy (Lot S127).

A one-time-only model, there were fewer than 2,000 Plymouth Superbirds created. While limited factory options varied across that group, this particular example took on a special significance soon after delivery, as it was used as a Bristol Speedway-Dragway Pace Car. The streamlined model offered a unique way to lead a pack of stockers around the high-banked half-mile racing surface in the mountains of east Tennessee, as the visage of its added aero-nose and wing were unmistakably linked to Mopar’s racing involvement.

Like all Superbirds, this car has a build date of November 30, 1969, allowing the requisite time for the body to be deemed legal for the season-opening NASCAR race at Riverside, California. Like its brethren, this car began life on Michigan’s Lynch Road plant floor. It was there that a 440/375-hp V-8 engine topped by a four-barrel carburetor was installed, along with the A33 Track Pak, which meant an A833 four-speed manual transmission and 3.54 Dana 60 Sure Grip rear completed its driveline, and heavy-duty cooling, power steering, and power front disc brakes were added as standard equipment.

The body received Blue Fire Metallic exterior paint and a mandatory black vinyl top, with its Bristol Speedway-Dragway livery adorning the unique front end. This car has the black bench-seat interior trimmed in silver, as well as the Hurst Pistol-Grip shifter, performance dash with Tic-Toc-Tach and 150-mph speedometer, AM radio, Voice of Road Runner horn button, and Petty Enterprises mechanic Dale Inman’s signature on the dashboard. Leaving Lynch Road, the car was taken to a nearby Chrysler pilot plant, where the tall wing, unique nose cone, and extensive Road Runner and Plymouth decalling were applied. Outside, this car has J45 hood pins, chrome exhaust tips, Rallye wheels, and Goodyear Polyglas tires, along with a full-size spare and jack in the trunk. Documentation on this car includes a window sticker, copy of the broadcast sheet, and a Plymouth letter from J.W. Farley. Superbirds will continue to be a benchmark of the superspeedway era, and this car’s special heritage sets its own pace in terms of exclusivity.

This historic 1970 Plymouth Superbird Pace Car is heading to auction, so if you want to add something special to your collection—or maybe you want to pair it with the earlier Daytona—check it out Saturday, May 21, at the Mecum Auctions event in Indy (Lot S127).