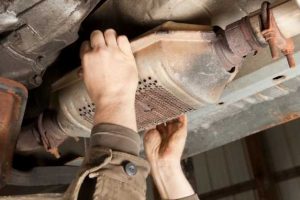 The past couple of weeks have not been good for catalytic converter thieves in California. Last week, the Los Angeles County Sheriff’s Department raided four locations, arresting 19 people and seizing 250 stolen catalytic converters. This week, sheriffs in neighboring San Bernardino county raided a home and recovered 400 stolen converters. Meanwhile, in nearby Anaheim, a would-be converter thief died when he was crushed by the Toyota Prius whose converter he was trying to pillage.

What’s the deal here? Catalytic converters contain precious metals which are rapidly increasing in value, including platinum (currently worth about $1,100 per ounce), palladium ($2,400 per ounce), and rhodium ($24,000 per ounce). A contributing factor could also be that many cars have been sitting quite a lot during the pandemic, what with so many commuters now working from home or otherwise reducing their outings. Combine the two, and you have opportunity for bad actors to do their things.

The L.A. Sheriffs valued their 250-converter haul at $750,000, which sounds a bit high to us, while in San Bernardino the police estimated their 400 converters at $100,000, which seems a bit low. In reality, replacing a stolen converter will likely cost you between $1,000 and $3,000 depending on the type of car. As for those stolen converters, they can be sold to recyclers for $50 to $250, according to the NICB.

Who is at risk? Hybrids like the Toyota Prius that fell on that unfortunate thief in Anaheim are frequent targets; since they run their gasoline engines less, their converters tend to have less contamination and therefore command higher prices on the black market.

Big trucks like the Ford F-250 and F-350 Super Duty also seem to be frequent targets. Our friends at Ford surmise this is because their higher ground clearance gives easier access to the converter (if only that guy in Anaheim had thought of that). We’ve noticed that among Ford converters, those for the diesels, and especially the big 6.7 liter V-8, tend to be the most expensive, but our Ford contacts were unable to enlighten us as to whether they contain a higher concentration of precious metals.

So what can you do? Here in California—one of the cat-converter-theft hotspot states, according to NICB, along with Texas, Minnesota, North Carolina, and Illinois—several police departments are offering to etch your license plate number (which, in this state, stays with the car) for free. You can also fit a device like the Millercat Catshield, available directly from some Toyota dealers, which is basically a metal plate with tamper-resistant screws that protects the converter from would-be thieves.

Of course, the best bet is to buy a car that doesn’t have a catalytic converter—something electric or hydrogen powered or very, very old. Otherwise, it’s best to watch carefully where you park … try to pick a well-lit area, especially if you have no other choice than to street park your car, or splurge a little for a secure garage.