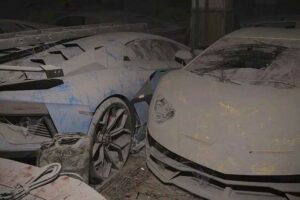 The Internet is full of talented artists who sometimes create stunning digital content right from their desks. TheDizzyViper is a young Italian who has more than 80,000 followers on Instagram and makes all sorts of 3D images. His renderings sometimes seem surreal and the latest photos he has published are quite intriguing.

In just a few days, the fictional renderings have made the rounds on social media, and it is likely that you have already seen them in a group or page dedicated to cars. TheDizzyViper has created images showing modern models from Bugatti, Lamborghini, McLaren, Pagani, and Rolls-Royce abandoned in a barn. They are covered in dirt and grime, damaged, and even used to store things like a ladder on one Lamborghini roof.

The cars featured are in a sorry state, covered in dust and cobwebs as if they hadn’t been driven in decades. Some are damaged like the Lamborghini Centenario parked next to a big pile of trash. One can imagine that the Bugatti Chiron Super Sport in one rendering has also suffered some damage. It is not sitting on its wheels but on a pallet in a tilted position as if it had been rushed into storage.

What owner is crazy enough to leave their six-figure sports cars in such a state? None, thankfully, as you are looking at computer-generated images of a situation that should probably never happen in real life for a very long time. Sure, we have seen some pretty exceptional barnstormers in the past, but none of them have shown modern cars released only a few years ago. That may change one day down the road when these modern machines are several decades old, stuck away, and forgotten about.Odeon

TheDizzyViper isn’t new to creating this type of rendering, as digging through his Instagram account revealed images of the same style posted several months ago. Maybe one day, he will decide to remove the watermark from his photos to fool internet users. They look quite real and could easily trick some into sharing them as legit.