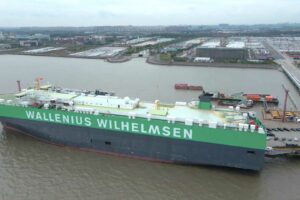 Several signs indicate that Tesla is heading for record deliveries in the fourth quarter of this year, even though we are only one month into it.

The first would be that both of the company’s factories are very busy, with recent drone footage of Giga Shanghai revealing a record number of brand-new cars parked in its lot—2,150 on October 28. Furthermore, the factory has its holding lot full with car carriers awaiting vehicles.

The Fremont factory is also bustling with activity, with a video released a few days ago revealing a constant stream of car carriers weaving in and out of the facility and holding lots filled with vehicles, including some brand-new Model S and Model X units.

Another sign that Tesla is in for a record fourth quarter is the reported daily production at Giga Shanghai: over 1,600 Model Y crossovers and over 2,000 Model 3 sedans. The factory is known to focus on producing export cars for the first two months in a quarter.

You can now add another hint that Tesla’s deliveries are on the rise: as of November 3, there were at least 12 ro-ro (roll on-roll off) ships carrying the automaker’s EVs to Europe and Asia.

Tesla export ship tracker Tesla Carriers Map showed that these ships departed from the ports of San Francisco and Shanghai to various locations in Asia and Europe.

Two of the ships left California and were headed to Taipei in Taiwan, while the other ten were en route from Shanghai to various European ports, likely loaded with Model 3 and Model Y vehicles. European destination ports include Southampton (UK), Zeebrugge (Belgium), and Koper (Slovenia).

On average, a car carrier holds 3,000 cars, so we’re probably looking at some 36,000 Teslas that are on their way to customers—assuming each ship is full and only carries Tesla EVs.