The Waiting List To Buy A Tesla Is Growing Rapidly 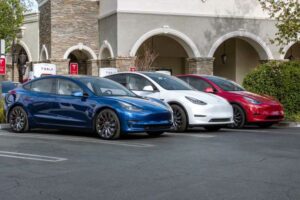 Tesla’s constraints and delays will likely get worse before they get better.

Posted on EVANNEX on August 28, 2021 by Charles Morris

Tesla’s infamous waiting lists are back. For most models, if you order today, you may be lucky to see your new Tesla this year.

Tesla is currently predicting a wait of four to six weeks for the Performance Model 3, and five to six weeks for the Performance Model X. For other models, estimated delivery times can be as far out as April 2022. Presumably, as Tesla and other automakers do when they have supply constraints, the company is putting its highest-margin variants at the head of the production schedule.

Waiting lists have been a feature of the company’s sales process for much of its history. When production of Model S began in mid-2012, Tesla had some 10,000 advance reservations, and it didn’t manage to crank the assembly line up to full speed until January 2013, at which time it triumphantly announced that the waiting time for a Model S had been cut to “only” four to six months.

Having more orders than you can fill may sound like a good problem to have, but in fact, it’s caused the demise of many a young company. Fortunately, Tesla eventually made it through this “Valley of Death,” and later navigated “Production Hell” with Model 3.

Delivery delays are no longer an existential threat for Tesla, but they certainly aren’t good news—later delivery means later payment, and a certain number of impatient buyers are going to give up, meaning no payment at all.

Above: Some of Elon Musk’s comments on the chip supply shortage and ongoing supply chain issues (YouTube: ExpovistaTV)

What’s causing the delays? The same shortage of semiconductors and other parts that are plaguing every automaker. Toyota was recently forced to cut global production by 40%, and GM, Ford and Stellantis have all announced temporary plant shutdowns.

“The chip supply is fundamentally the governing factor on our output,” said Elon Musk in July. “It is difficult for us to see how long this will last because…this is out of our control essentially. It does seem like it’s getting better, but it’s hard to predict.”

A month later, it isn’t getting better. “The chip shortage issue isn’t moderating to the extent that the Tesla bulls had hoped,” said Dan Ives, Tech Analyst at Wedbush Securities.

It’s not just chips—sourcing other parts is proving problematic too. “For the rest of this year, our growth rates will be determined by the slowest part in our supply chain,” said Musk.

The supply issues may take a bite out of forecasts that Tesla would deliver 900,000 vehicles this year, and Ives and others believe that this is one reason TSLA stock has been moving sideways lately. “Investors are focused on deliveries and rising competition in the EV space,” says Ives. “That’s the overhang on the stock right now.”