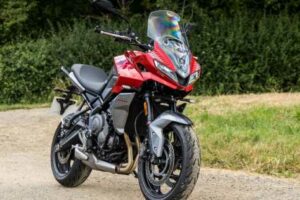 When we rode the Triumph Trident last year, we declared it “almost the perfect newbie machine”. A big part of that was the engine. It’s almost a little annoying when manufacturer marketing spiel turns to be bang on rather than a bunch of waffly nonsense, but what Triumph says about its inline-three engines blending the top-end smoothness of an inline-four with the low to mid-range gutsiness of a twin is all true.

Triumph will flog you a triple in various forms, right the way up to the monstrous 176bhp 1160cc unit in the Speed Triple RS, and the enormously torquey 2.5-litre lump nestling inside the Rocket III’s big frame. The 660cc baby of the range used by the Trident in its unrestricted form (there’s an A2 license-friendly 47bhp restrictor available) offers up 80bhp at 10,250rpm and 47lb ft of torque at 6,250, ideal numbers for a fresh rider, and enough to keep most more experienced interested.

But back to our original verdict – specifically the ‘almost’ bit. The Trident’s damping lacks sophistication, meaning it can be pretty bouncy over poorer road surfaces, and let’s face it, a good chunk of the UK road network can be labelled thusly. Granted, there’s only so much you can do in terms of suspension at this kind of price, but Honda, for instance, does it better with its lower-end bikes while using similar Showa hardware.

That’s where the Tiger Sport 660 comes in. Here we have the same frame and engine, and even another Showa fork and monoshock combo, except this time – crucially – we have 30mm more travel at the front and a 16.5mm increase at the rear. We’ll get back to that soon.

Elsewhere, there’s a lengthened swingarm, plus a different handlebar and repositioned footpegs to give a more upright riding position. Finally, there’s a 3.2-litre larger fuel tank to give a total of 17.2 litres and a half or ‘bikini’ fairing, making the Tiger 660 much more suited to touring than its cousin.

The Tiger is made in the adventure bike or ‘ADV’ style, but Triumph is acutely aware that owners generally aren’t going to be chomping at the bit to bomb across a remote desert track in one, much like how the majority of SUVs never see even a hint of mud. As such, you get road-biased tyres at each end – Michelin’s awfully good Road 5s, the same boots fitted to the Trident and in exactly the same sizes front and rear.

These provide bags of grip and a confidence-inspiring riding attitude, which means you’ll happily get stuck in on a windy bit of road from the off. And the Tiger 660 will really deliver the goods in such an environment. For all the additional travel from the suspension, the baby Tiger is near as damn it as fun to ride as the Trident, with that same sense of keenness to change direction and gobble up your favourite B-road without breaking a sweat.

And yet, because it does have additional squish from the fork/shock (and seemingly a little more softness to the damping), the Tiger 660 is mostly unphased by imperfections in the road surface. That divot in the road surface which might induce a tightening of the sphincter on the Trident won’t even register aboard the Tiger. Great for newbies who don’t want to experience unnerving moments in their early days of riding, and for any rider valuing comfort.

The best part of the package remains that joyous 660cc triple. It’s an effervescent little thing, eagerly spinning up to 10,000rpm and beyond and parping out a wicked noise as it does so. The throaty, fizzy nature of the exhaust note has been dampened a little by the new-ish Euro 5 regulations, but this is still one of the best-sounding bikes you can get for the money.

The instrument cluster is the same small but smartly-designed unit seen on the Trident. There’s a more old-school LCD in the top bit displaying information such as speed, RPM and fuel levels, while the colour TFT below acts as the trip computer. All the key information is easily accessible via a few button pushes, and with the optional My Triumph connectivity box, it can display navigation instructions from your phone and control a GoPro.

Wind protection from the bikini fairing is decent, but if like me you’re six-and-a-bit feet tall, you might not get on so well with the manually adjustable screen. It’s easy enough to put into its multiple positions on the move via its big grab-handle, but at full height, it merely seems to direct a concentrated blast of air at your helmet. Taller riders are probably better off leaving it as low as possible, which, to be fair, can be said about a lot of OEM ADV screens.

As for other less-so-good things, it’s slim pickings. There are some cheaper-feeling parts, such as the levers and mirrors, but that’s a minor complaint when the build quality is – overall – pretty good.

You’re not even paying that much of a premium for its additional comfort and capability over the Trident – the Tiger 660 is a thoroughly reasonable £8745. That puts it in the ballpark as the likes of the Honda NC750X and Yamaha Tracer 700, neither of which are quite as tempting.

Really, though, the Tiger 660 is a rival to any entry-level bike for similar money, the related Trident included, hence why we keep foisting it into the conversation as a point of comparison even though it’s a different kind of bike. Because unless you’re (understandably) very taken with the retro-inspired looks of the Trident, you’re better off spending just a little more on the Tiger, which will be more useful in more situations yet just as entertaining when it wants to be.

It’s not just the strongest of the budget ADV clan – it’s probably the best bike in terms of all-round ability and fun that you can spend about £9000 on. Or any form of personal transportation, for that matter – wouldn’t you rather one of these than a similarly-priced Citroen Ami, or one of those extortionate annual rail cards…?

Also read: The Triumph TE-1 Is A 174bhp Electric Motorcycle With A Battery From Williams