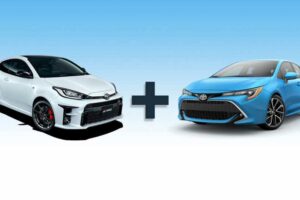 When Toyota North America executive vice president for sales Bob Carter hinted back in June that the company’s Gazoo Racing performance sub-brand would be extended beyond the Supra and 86 coupes, he wasn’t teasing. Well-placed sources have confirmed Toyota is working on a GR version of the Corolla. What’s more, our sources say the GR Corolla will be all-wheel-drive with a six-speed manual transmission, and will have a more powerful version of the quirky 257-hp, 1.6-liter I-3 engine from the acclaimed, rally-bred GR Yaris under the hood.

Yep, Toyota’s getting serious about GR. The warmest Corolla Hatchback you can buy right now in the U.S. is the surprisingly likable XSE manual, which packs 168 hp. The GR Corolla will have the hardware be a benchmark hot hatch, ready to run wheel-to-wheel with the likes of Volkswagen’s Golf GTI or R.

While the GR Yaris, designed from the wheels up to compete in the World Rally Championship, shares only its front and rear lights, exterior rear-view mirrors, and the roof -mounted antenna with the XP210 Yaris launched in 2020, the GR Corolla will share most of its basic structural and body hardware with the regular E210 Corolla hatchback. It will, however, get aggressive front and rear fascias, with a deeper spoiler and splitter up front and GR badging on the grille. It’ll be finished off with a currently fashionable faux diffuser at the rear, with a single big-bore exhaust outlet on either side.

Toyota, which lobbied the FIA to allow a three-cylinder engine in the World Rally Championship, says the G16E-GTS engine in the GR Yaris is the smallest and lightest 1.6-liter turbo motor in the world, and the world’s most powerful three-cylinder production engine. Why three-cylinders? “We preferred this engine due to its light weight and compact size,” says development project leader Atsunori Kumagaya. “It’s simple to install and the lack of exhaust gas interference made it easier to obtain power.”

In the GR Yaris, the G16E-GTS makes 257 hp at 6,500 rpm, and 265 lb-ft of torque is available from 3,000 rpm to 4,600 rpm. It has oil jets to cool the pistons, large exhaust valves, and a single-scroll turbocharger integrated into the exhaust manifold whose turbine spins on ball-bearings to reduce lag.

Toyota sources have confirmed the engine will be tweaked to deliver more power and torque in the GR Corolla, and there’s a lot of headroom for upping its output, even in road-legal tune. In Yaris WRC specification the G16-GTS would have comfortably pumped out 375 hp and 332 lb-ft of torque with the mandatory 1.4-inch airflow restrictor in place. (The car never competed because of the disruption to the championship caused by Covid.)

The GR Corolla will retain the standard car’s MacPherson strut front suspension, albeit with strengthened components and different geometry, and will likely use a version of the bespoke multi-link setup from the GR Yaris at the rear—easily done because while the front half of the GR Yaris chassis is basically the TNGA-B platform from the regular Yaris, the rear section has been adapted from the TNGA-C platform that underpins the Corolla.

Expect bigger disc brakes at each corner, though how much bigger will depend on cost targets. The 14-inch front rotors available up front on the GR Yaris are larger than those on the GR Supra, while the rear rotors are 11.7-inch items. The GR Yaris rolls on 18-inch alloy wheels, so the Gazoo Racing team wouldn’t need to go up a rim size to accommodate the GR Yaris brakes. And the Hatchback XSE is already fitted with 18s, up from the 16-inch alloys on the regular Corolla, so we know the bigger wheels fit.

The GR Corolla’s all-wheel-drive system will use the simple and light performance-oriented hardware from the GR Yaris. The first new AWD system developed by Toyota in more than 20 years, it has a fast-response center coupling that can be set in three modes—Normal, which sends 60 percent of the torque to the front wheels; Sport, which sends 70 percent to the rear wheels; and Track, which splits the torque 50:50. A hypoid gear transfer case links it all to a conventional six-speed manual transmission.

In our testing the 2022 Golf GTI with the optional seven-speed DGS dual clutch transmission has posted a 5.4 second 0-60 mph time and ran the quarter mile in 13.9 seconds at 103.9 mph. It would be logical to assume a 270-hp GR Corolla would run similar numbers, with the all-wheel drive traction off the line and more power at the top end helping to counter the quicker upshifts from the DSG transmission. That’s a big step up from the 7.3-second 0-60 time and 15.7-second quarter mile at 89.9 mph we’ve gotten from the Hatchback XSE.

But what if Gazoo Racing decided to target Volkswagen’s all-wheel drive Golf R instead? The Golf R packs 315 hp and 280 lb-ft in six-speed manual form, and 315 hp and 295 lb-ft with the seven-speed DSG dual-clutch. In theory the three-cylinder G16E-GTS can easily match those numbers. Indeed tuners in Japan are already getting 375 hp out of the engine, and they’ve found the GR Yaris’ six-speed manual is robust enough to cope with that sort of grunt. A GR Corolla with 315 hp and 295 lb-ft of torque would likely deliver a 0-60 mph time of under 5.0 seconds, and a potential top speed of 150 mph.

Which way will Toyota go? Good question. The answer probably lies in how Toyota sees the GR Corolla fitting in the GR lineup, and how determined it is to go after either the Golf GTI or the Golf R.