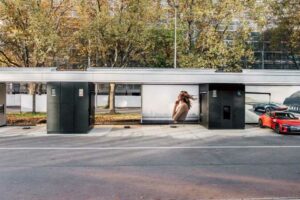 Audi has opened a new charging hub in Zürich, Switzerland, the second after the pilot station in Nürnberg, Germany inaugurated late last year. The Audi charging hub Zürich opened earlier this month in the city’s vibrant banking district of Oerlikon, directly in front of the parking garage at Messe Zürich (the exhibition and trade center).

The second Audi charging hub in the world offers four covered high-power charging (HPC) points, each with an output of 320 kW. The site’s storage capacity amounts to 1.05 MWh—comparable to the storage capacity of 11 Audi e-tron 55 EVs—and it can supply power for up to 60 electric vehicles per day.

The hub also uses 100-percent renewable energy, while a photovoltaic system on the roof over the so-called charging cubes supplies additional green energy.

As with the pilot station in Nürnberg, the Zürich charging hub is based on charging cubes, modular containers that include both quick-charging infrastructure as well as refurbished lithium-ion batteries (second-life batteries) made from disassembled Audi development vehicles.

“The Audi charging hub pilot project in Nuremberg proved that our unique concept has its finger on the pulse at all times. The urban charging concept is for city drivers, and it offers them an efficient alternative to charging from home.”

Audi’s charging hubs allow drivers of electric cars who don’t have chargers at home to charge their vehicles easier and significantly faster than using other charging infrastructure.

Audi customers can use the myAudi app to book an individual charging slot in advance for 45 minutes at no extra cost. Reservations are available for the first 15 minutes, after which they’ll be canceled. Mind you, the Audi charging hub is not restricted to owners of Audi vehicles; it can be used by all brands of EVs equipped with a CCS charging port.

In addition to charging points, the Zürich hub features two large 55-inch screens that provide essential information and tips about maximizing battery charge. Unlike the Nürnberg site, the one in Zürich does not feature a lounge because the hub’s immediate vicinity offers a wide range of services.

Audi also plans to open new charging hubs in Salzburg (Austria) and Berlin (Germany) before the end of the year.