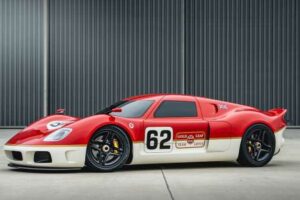 Lotus isn’t the company it used to be. The new Emira is its last car with an internal combustion engine. After that, EVs will lead the way for the Norfolk-based automaker. But that doesn’t mean the spirit of Lotus is evaporating like so much spilled gasoline. If anything, those evaporative emissions are flaming out in bright gloryâas evidenced by Radford’s retrofuturistic Type 62-2 sports car.Â

Radford has been teasing the Type 62-2 for a while now, and we’ve known that it was going to be based on modern Lotus tech. It’s probably not the new Emira, but, to be frank, whichever Lotus it really is, it hardly matters. This sports car is a stunning tribute to the original Lotus Type 62, and it’s painted in the same red and white livery as the car that raced in the late 1960s.

Speaking of power, the Type 62-2 uses the same supercharged 3.5-liter V-6 that’s been featured in Lotuses—namely the Evora—for years now. In the “Classic” Type 62-2 it makes 430 hp, but if you opt for the Gold Leaf car a host of improvements like upgraded connecting rods, pistons, and camshafts result in 500 horses.

Should you want to go all out and spec the John Player Special Type 62-2, power jumps to a dizzying 600. Those engines will be paired to either a six-speed manual or a seven-speed dual-clutch automatic transmission, except the John Player Specials, which will come exclusively with the DCT. Power will be sent to the rear wheels only and all Type 62-2s come with an electronically locking rear differential.

The Type 62-2 is constructed using a bonded and riveted aluminum frame, and the body panels are made of a carbon composite material. The carbon composite makes up pretty much every body panel of the car, including the extremely cool (and retro) double fins at the back of the car. The aim was to make sure the Type 62-2 was as light as possible, and Radford is claiming a dry weight of less than 1,000 kilograms (that’s just over 2,200 pounds in old money).

Low weight is clearly good for a car’s performance, but Radford wanted to make sure the Type 62-2 was dialed in, so it brought Formula 1 World Champion Jenson Button on board to work on the car’s handling. So, even though this sports car looks like something off a poster from the 1960s, we think it is safe to assume it will drive every bit as well as modern supercars.

Not everything is quite so throwback, though. The mirrors have been replaced with cameras, and there’s a 6.0-inch TFT display mounted behind the steering wheel to give the driver all the key information he or she might need. There also is Bluetooth connectivity, room for luggage behind the engine bay, and a five-speaker audio system.

The new company was founded by Mark Stubbs, presenter Ant Anstead (who stars on Wheeler Dealers on the MotorTrend app), Roger Behle, and Jenson Button. Just 62 of these neo-Lotuses will be built, and since this is a coach-built car, it’s almost certain that no two will be alike. Prospective owners will be able to spec their cars however they’d like, just as long as they can afford the as-yet-unspecified price tag. It’s safe to say this modern classic won’t be cheap, though.