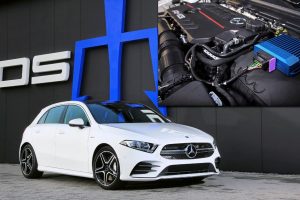 You certainly can’t fault the straight-line performance of the Mercedes-AMG A45, with a 0-62mph time of 3.9 seconds making it as fast as the new G82 BMW M4 and other much more expensive, more exotic machines. You are paying one hell of a premium over the very good A35 for the extra shove, though, with the A45 S coming in at a wallet-annihilating £15,000 more.

If you merely want to go as quickly as the A45 S and aren’t fussed by the trick, oversteer-inducing all-wheel drive system (which in any case can feel odd at times), you could just give Posaidon a ring. The German company, which hit headlines a while back for its 520bhp A45 ‘RS’, has revealed a few tuning options for the ‘lesser’ AMG’d A-Class.

Option number one is a software tweak, which increases the 2.0-litre inline-four’s power from 302bhp to 350bhp, with the torque jumping from 295lb ft to 369. Alternatively, Posaidon will install a plug-and-play tuning box, giving the same power increase but a slightly lower torque output of 354lb ft. Either of these solutions will drop the 0-62mph time by four-tenths to just 4.3 seconds, with the top speed sitting pretty at 174mph.

Again, software fiddling is involved, along with the fitting of an upgraded turbocharger. To make the most of the newfound shove, Posaidon also tunes the software for the car’s seven-speed dual-clutch automatic gearbox.

The mods aren’t restricted to the A35, either – they’re good to go on any of the half-fat AMG cars powered by the M260 twin-scroll turbocharged engine. That means it’s possible to unlock 395bhp on (deep breath) – the A35, the A35 saloon, the CLA35, the GLA35 and the GLB35. And the S versions of those vehicles. Obvs.

Posaidon hasn’t offered up prices just yet, but we can be fairly sure the RS400 pack will work out substantially cheaper than splurging on a ‘45.