Home » Car Reviews » The OldSkoolHonda Meet Takes Over Pasadena, and We Have the Highlights

The OldSkoolHonda Meet Takes Over Pasadena, and We Have the Highlights 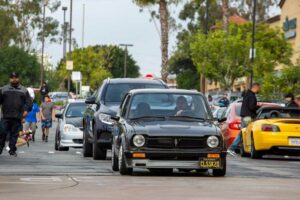 Over the last few years, the Old Skool Honda social media presence has grown rapidly, its ranks swelling to nearly 140,000 Instagram followers and over 100,000 members in its public discussion group on Facebook. With that attention and fanfare comes good ol’ fashion word-of-mouth and consistently successful attendance numbers at the events they organize every few months.

A regular stop for those events lands them in the (now shuttered) Sears parking lot in the city of Pasadena. Surrounded by typical SoCal coffee and shopping storefronts and able to accommodate a few hundred cars, it’s long served as an easy-to-find locale for early morning gatherings for the dedicated Honda community. Some are locals, others make the trek from surrounding cities and there’s always a nice variety of cars along with a few surprises on hand.

In a previous Pasadena get together that took place in December, the normally controlled crowds that leave the parking lot and head to their respective freeway entrance were peppered with high-revving dashes down the busy surrounding streets. It’s not unheard of, having a few people flex their way around a crowd of fellow enthusiasts but it became excessive. The act of tearing through a usually quiet area on an average Sunday morning brings with it a certain amount of unwanted attention.

After that event the Old Skool Honda Meet page expressed some disappointment in some of the attendees’ actions upon leaving and, of course, there was quite a bit of pushback. The argument was based on the fact that those attending felt that because they built their cars to perform, they should exhibit that performance when and where they want. This group (who apparently have never heard of a road course or drag strip) remained adamant about cars being built to drive and being driven hard. They weren’t, however, able to establish why that hard driving practice must take place at or around the sort of event that already carries with it years of stigma and scrutiny from onlookers, on or around public streets.

Arriving at the Sears lot at around 8:00 a.m. this year, there were plenty of cars already on hand with a constant flow of incoming and outgoing cars throughout the morning. Along with some regulars and newcomers, a group of police officers were there scanning the lot and asking quite a few questions—most likely due to what occurred back in December.

Public events are always a delicate balance and as hard as it is to contain that right foot when leaving a meet and eyes are on you, keep in mind that your actions go much further than the short-lived display that, in most cases, isn’t impressing anyone. With that P.S.A., here’s a rundown of what we saw at the Old Skool Honda Meet’s return to Pasadena.

This Accord sedan was anything but innocent. Armed with a front-mount intercooler, it also uses 235/60 M&H Racemasters that run well outside the factory fenders.

Just in front of the meaty tire is an exhaust exit cut into the bumper.

You won’t find many stock examples of Hondas beloved CR-X and even fewer in decent condition. This right-hand drive JDM model, complete with its appropriate B-series heart, is an anomaly. Straight body, nicely cared for paint, and no rust in sight—a true gem.

Under the hood of Kenji Sumino’s restomod first-generation CRX is a 1.6-liter, DOHC non-VTEC mill sporting period correct carburetors. This setup was common in the early ’90s when the D16A1 from the original Integra filled wrecking yards and its not-so-distant cousin ZC, plucked from Japanese Civics and CRXs, was imported en mass. The spotless build (or rebuild, if you will) cuts no corners and always draws a crowd, especially when its hood is popped.

A pair of EM1 Civics make their way into the main parking area. The celebrated Si model based on the sixth-generation Civic platform has remained a fan favorite ever since its introduction in 1998, becoming the first U.S. Civic model (other than the del Sol) to offer a DOHC VTEC engine.

A few Civic generations later, the Si sedan was introduced and with it came the venerable K20 engine essentially borrowed from the RSX. This particular model is special due to the fact that only 1,000 were produced in Mugen trim – this one taken further with a JDM front and rear end conversion, and Regamaster Evo wheels.

The product of a long-term build, J. Horton’s DB2 Integra GS-R carries its original Aztec Green Pearl paintwork and shows off a front-mount intercooler that helps reap over 600 whp on E85 pumping through its model-specific B17A.

Picture-perfect RHD NSX sitting low atop bronze TE37 with bright red Recaro buckets inside of an interior that’s every bit as clean as its outside.

Right next to the NSX we found this JDM CR-X on refinished Mugen CF48 wrapped in Falken Azenis RT660, a tire that we’ve fallen in love with.

On the passenger side, the CF48s were fitted with their aero covers for a completely different look.

This custom sand rail turned everyone’s heads as it arrived and made its way through the packed parking lot before settling in.

It didn’t make sense from a distance, but step in and take a closer look and you’ll find Honda’s golden child K-series mounted in the rear.