Home » Car Reviews » The Next Forza Motorsport Game Has Been Teased, And It's An Xbox Series X Exclusive

The Next Forza Motorsport Game Has Been Teased, And It's An Xbox Series X Exclusive 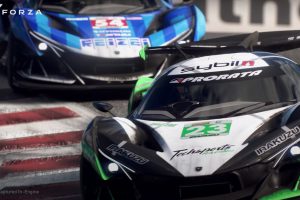 Bad news: the next game in the Forza Motorsport series won’t be a launch title for the Xbox Series X. Instead, it’s understood we’ll be kept waiting until 2022. Judging by this short teaser trailer, though, it’ll be worth waiting for.

As noted by the text in the bottom left corner, yes, this is indeed footage made using the game engine. And good lord is it pretty. Forza Motorsport (which will be titled simply thus – no numbers tacked on the end) will feature 4K/60 frames per second capability and ray-tracing graphics.

This time around, Forza Motorsport will be exclusive to the Xbox, unlike FM7, which is available on Windows too. FM6, meanwhile, was reborn as the free-to-play ‘Apex’ Windows port a few years after release.

The short and sweet trailer doesn’t reveal a whole lot, although we do see a fancy-looking pit garage which appears to function as the menu system. In there is a BAC Mono, a Mazda RT24-P IMSA prototype racer, and an Apollo IE. We get to see a bunch of the latter cars racing at Laguna Seca during the second half of the video.

If you’re an early Series X adopter and want to sink your teeth into some Forza action a little sooner, it’s worth noting Horizon 4 is in line for a 4K/60fps rejig for the new console.