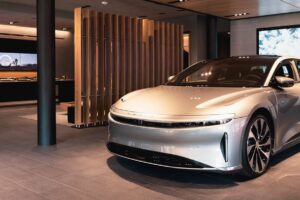 After almost a decade in development, a domestic challenger to the Tesla Model S finally appears to be on the cusp of a market launch. The EV startup Lucid Motors has just opened its first studio in New York City, intended to be the flagship store for the brand, just weeks ahead of the start of production of the Lucid Air sedan later this year. The model—slated to be offered with up to 1080 hp—is currently undergoing the last round of testing, with the company indicating that it expects the sleek sedan to be the first on the market to offer over 500 miles of range in the EPA cycle.

In its first year the automaker plans to offer four flavors of the Air sedan, with the base model being the Air Pure with 480 hp on tap and a targeted 406-mile range, and a starting price of $77,400. The Air Touring model will dial up that output up to 620 hp and 406 miles of range with a starting price of $95,000, while the Air Grand Touring model will offer 800 hp and a projected 517 miles of range in the EPA cycle, courtesy of 113-kWh battery pack. This version will start at $139,900.

The launch model, however, will be the Air Dream edition with 1080 hp and a projected 517-mile range, and it will be the priciest by far with 500 Dream editions slated to be offered for a heady $169,000.

Lucid aims to build 20,000 examples of the Air in 2022, and the company says it has already passed the 10,000 reservation mark for its sedan. So the first year of sales appears to be assured, for the most part.

“Opening a Lucid Studio in New York, one of the most vibrant cities in the world, allows us to demonstrate how Lucid Air and its groundbreaking technology perfectly complement the fast pace and refined taste of the Big Apple,” said Peter Rawlinson, CEO and CTO, Lucid Motors. “It’s also the perfect time to open our first Lucid Studio in New York, as we will add significantly to a city that is returning to form in delivering the world’s greatest experiences to residents and travelers alike.”

Of course, between the time that Lucid first showed its sedan prototype, quite a lot has changed and the luxury EV sedan market is about to be very well stocked with competitors.

The Tesla Model S is about to enter its 10th year of production, having just showed off the Plaid flavor complete with a yoke for a steering wheel, while the Porsche Taycan is on sale as well, with the Audi e-tron GT and Mercedes-Benz EQS not far behind. The Air will also debut in a market that is seemingly moving away from high-priced EVs meant for deep-pocketed early adopters, and is now concentrating in getting crossover buyers into EVs priced between $30,000 and $40,000, like the VW ID.4 and the Chevrolet Bolt EUV. From that perspective, its success perhaps depends partially on the higher-priced electric sedan segment not being oversaturated with too many players.