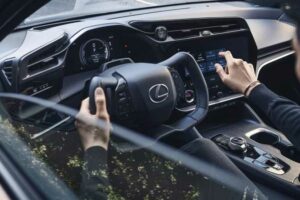 We have to admit, we’ve always found the concept of a steering yoke pretty cool, even if we ultimately don’t care for Tesla’s recent attempt at the concept. Surprisingly, the 2023 Toyota bZ4X is following up that effort with a yoke steering option available in the Chinese market, and now Lexus has teased it will solidify the trend here in the U.S. with an image for the new Lexus RZ 450e EV—the bZ4X’s luxurious sibling—coming later this month.

Officially, the Lexus website only offers that the Lexus RZ 450e will be the “first-ever fully electric Lexus,” and something about how “sustainability meets sleek lines and power, as only Lexus could imagine.” The company has also announced it will finally reveal the RZ 450e on April 20, but in the accompanying images released, the car is featuring what appears to be a Lexus version of Toyota’s Chinese-market yoke option.

While no further information was released with the exciting photos, the shape and setup of the steering yoke looks strikingly similar to the steering yoke steer-by-wire system previously talked about on the Chinese-market Toyota bZ4X. According to the bZ4X’s debut press release, lock-to-lock yoke rotation is limited to 150 degrees of motion, which means less input yields more steering feedback over a traditional full-wheel setup.

Toyota refers to this concept as “One-motion grip,” which the company says the design improves driver legroom and forward visibility. On the bZ4X, various steering settings are available to yoke-owners, or a traditional steering wheel option is also available if they want something more familiar. It’s possible Lexus also offers U.S. customers a choice between the yoke teased today and a traditional wheel setup on the upcoming RZ 450e, but we’ll have to wait to find out.

Other details we notice in the new images are the two square thumb-pads on either side of the yoke. This detailing is reminiscent of previous attempts at a user interface system from Lexus, sometimes as a clunky trackpad, so we may see a similar thing now located under the thumbs on the yoke.

We also make out a dual-zone climate control setup under the model’s hand, at least three USB-C ports, a new rotary drive-mode selector, a digital driver display, and possibly a dashboard cutout for a head-up display. On the screen are what appear to be the vehicle’s sensory safety options, including the selected parking support brake, safe exit assist, blind-spot monitoring, and rear-cross traffic alert. We’ll know a lot more about the Lexus RZ 450e’s features, and it’s funky yoke, on April 20.