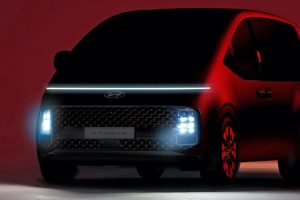 You’re looking at the new Hyundai Staria, and before you get too excited, no, it won’t be sold here. This is the replacement for a van known as the Starex, the sort of anonymous (although in its latest facelift, almost handsome) MPV that does taxi, livery, and people-hauling duties in Asia and Europe.

The van market abroad is a little different from our kiddo-hauling, cupholder-sporting traditional van market, even before the SUV wave inundated van sales. But even the most ardent Starex fans couldn’t possibly have dreamed about what it would metamorphosize into.

Hyundai says the new Staria has a “strikingly futuristic and mysterious exterior, resembling a spaceship”—and while normally we’d rather describe a vehicle to our readers in our own words, the company just nailed it.

Remove the wheels and it could be a transport pod from The Expanse. Or an autonomous taxi from Westworld, outside the park at least. And just to show you how far Hyundai’s styling prowess has grown, the Staria is arguably more interesting from a stylistic perspective than that Porsche Vision Race Service concept van revealed a few months back. This is, after all, the company that just dropped jaws with the Ioniq 5—a company clearly seeing styling as a major differentiator, and a way to stand out. And stand out, the latest products have; we’re looking at you, Sonata and Elantra sedans, as well as the 2022 Tucson crossover.

We don’t expect Porsche-esque performance from the Staria—smart money is on specs that roughly match the Starex’s mostly diesel offerings—and indeed Hyundai isn’t releasing any hard details yet. But for our purposes, in a market that almost certainly won’t get the Staria at all, the important thing about this van is how it looks. Which is futuristic—and awesome.

If Hyundai ever wants to dip a toe into this segment again in the States, the Staria isn’t a bad place to start. After all, who remembers the Entourage minivan? No one.