The Grand Tour returns on Dec 18 with A Massive Hunt – paultan.org 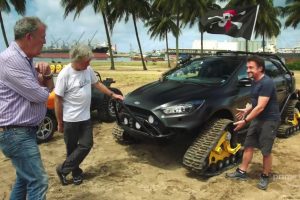 It’s been quite some time since we last heard from The Grand Tour gang, with the first episode of season four being Seamen that aired on Amazon Prime Video way back in December last year. Thankfully, we now have a release date for episode two, titled A Massive Hunt, and it is December 18, 2020.

The large time gap between the two releases is largely due to the Covid-19 pandemic, and this will likely affect the production of future episodes, as international travel is still somewhat restricted. As it stands, season four (called The Grand Tour Presents:) will only consist of two episodes, as previously confirmed by the show’s executive producer, Andy Wilman.

As we’ve seen in the first episode, the show has switched to a new format that is made up of big-budget specials, shifting away from studio segments and the tent that were featured in its first three seasons.

In A Massive Hunt, the crew of Jeremy Clarkson, Richard Hammond, and James May embark on an adventure across Madagascar in search of some treasure. As this is still (somewhat) a car show, there’s a trio of diverse cars on show, including Clarkson driving a Bentley Continental GT, Hammond in a Ford Focus RS, and May piloting a Caterham Seven.

The trailer for the episode shows the cars in their natural form, but they are later transformed into off-roading monsters to deal with some rather harsh terrain. If you’ve never seen a Focus RS with tank tracks, this episode will change that for you.