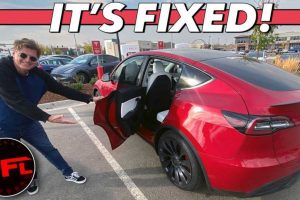 The problem was fixed yet again (for the third time) and this time hopefully for good because they found the fault that was causing it.

The Fast Lane Car bought a Tesla Model Y as a long term test car and while they didn’t encounter major issues with the vehicle, they were definitely annoyed by one defect that kept cropping up. This issue was not only a nuisance, but it also potentially posed a safety threat, so it’s good news that it was finally fixed and its root cause pinpointed.

Trying to open the rear left door of their Model Y became impossible after the electronic latch mechanism simply didn’t go off. You could not open it from the inside or the outside, and because the access to the mechanical override to open the door was located in a very awkward and hard to get place (you needed a small prying tool or flathead screwdriver to get to it), it essentially meant rear passengers could be trapped inside in the event of a crash.

At first, they took the car back to Tesla which had the latch itself realigned and this fixed the issue temporarily. Then it broke again, they took it back and that fix only lasted a few days. Now, though, they posted a new video announcing Tesla had found the source of the problem and so it should not reappear in the future.