The Electric 2024 Porsche Macan: The Inside Scoop (Literally) 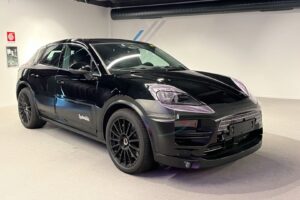 We may have come to understand “PPE” as one thing (personal protective equipment) over the past two-plus years, but back in 2018 when Porsche and Audi began developing their own PPE, it meant something entirely different. Four years later, the two Volkswagen Group brands’ new Premium Platform Electric modular EV architecture is finally almost ready for prime time. While Audi was the first to preview what PPE would look like underneath the A6 E-Tron concept, Porsche invited us to check out the new PPE platform itself and also showed us the early workings of the new 2024 Porsche Macan Electric prototype.

If what Porsche showed us of PPE is any indication, the new 2024 Macan Electric—it’s set to be the electron-powered stablemate to the existing gas-drinking Macan—ought to make prospective Tesla Model Y, Ford Mustang Mach-E, and Kia EV6 GT shoppers think twice about which premium performance SUV they buy. And despite shared parentage with Audi, the new platform is uniquely Porsche in its ethos. It takes lessons learned from today’s Porsche Taycan and implements them in a versatile new platform designed to underpin everything from the new Macan Electric to quite likely the new Porsche 718 Electric sports cars.

Most automakers slice their salami with different motor and battery configurations for different models, but Porsche takes a somewhat different approach. All PPE Porsches, beginning with the new 2024 Macan Electric, will sport new 100-kWh battery packs with 800-volt architecture. Why 100 kWh? Porsche says a battery pack this size is the best compromise between range and performance. The 800-volt quick-charging capability—a technology Porsche helped pioneer in the Taycan—will help bridge any perceived range gaps.

Porsche says its initial peak charge speed targets for PPE-platform vehicles is “a little bit” higher than the 270-kW rate the Taycan is now capable of, and that the Macan Electric can charge from 5 to 80 percent on a 350-kW charger in less than 25 minutes. Given the fact Porsche is investing in a network of public 300-kW chargers exclusively for Porsche owners in Europe, we’d be surprised to see the PPE-platform Porsches sport the 350-kW charging rates that 800-volt systems are theoretically capable of.

Stuttgart has some tricks up its sleeves for reducing charging times on slower DC fast-charging stations, too: The 2024 Porsche Macan Electric’s battery pack is capable of what Porsche calls “bank charging.” This technology allows the car to “split” its 800-volt battery pack into two 400-volt packs that can charge in parallel, which allows for quicker charging than is otherwise possible.

PPE Porsches will also be able to dig deeper into their batteries than the Taycan. As automakers like GM have found, DC fast charging hasn’t been as hard on Taycan batteries as Porsche initially expected, so the company plans to make a significantly larger portion of the battery usable to owners. The final percentage is still being worked out, but Porsche says between 96 and 98 kWh of energy could be available to Macan Electric owners, with just a small 2-kWh buffer. The Taycan, in comparison, generally utilizes about 10 kWh of its 79.2-93.4-kWh battery packs as a buffer.

The new 100-kWh battery pack consists of 12 prismatic cells containing an 8:1:1 ratio of nickel, cobalt, and manganese, which Porsche says helps it achieve a higher energy density than the 7:1:2 ratioed cells in the J1-platformed Taycan. It’s too early to talk range, but it’s a safe bet to expect at least 300 miles on the stricter EPA range test for the 2024 Porsche Macan Electric. Smaller battery packs are possible with PPE, but it’s unlikely the automaker fits a larger one into vehicles on this platform.

Another trick up PPE’s sleeve is what Porsche calls its Integrated Power Box. Mounted just below where the Macan Electric’s rear seats will be, the Power Box combines the onboard A/C charger, DC/DC converter, and high-voltage heater in one compact package, reducing weight, complexity, and costs. Porsche says PPE can also be built with varying wheelbases and widths for a wide variety of new vehicles.

Powering the 2024 Porsche Macan Electric—and likely many other PPE Porsches—are two new permanent-magnet motors. These liquid-cooled motors are good for up to 603 hp and 737 lb-ft of torque, far greater than the 434 hp and 405 lb-ft the current range-topping Macan GTS produces. In a clear nod to its heritage with the 911, Porsche mounts the rear motor behind the rear axle in what it calls its Performance Rear Axle, giving the Macan Electric a 48/52 front/rear weight balance. Mounting the rear motor so far back also gives Porsche engineers the clearance to fit the electric Macan with four-wheel steering. This tech, coupled with an electronic rear differential on top models and standard Porsche Active Suspension Management with air springs, ought to ensure the Macan Electric and whatever other Porsches are underpinned by PPE live up to the badge on the frunk (yes, the Macan Electric will have a frunk).

You can also expect the 2024 Porsche Macan Electric, like the Taycan, to sport charge ports on both sides of the vehicle, decouple the front motor in normal- and range-drive modes, and be incapable of one-pedal driving as Porsche thinks it’s inefficient. Unlike the Taycan, the Macan Electric will have a single-speed transmission instead of a two-speed automatic.

What Else Do We Know?

Although Porsche’s presentations were heavy on PPE, the company did have a camouflaged Macan Electric prototype handy, and we gleaned a few observations from looking it over.

For starters, it’s likely slightly larger than today’s Macan SUV, and it sports an aggressive fastback-like roofline, similar to that of its Cayenne Coupe big brother. Up front, it boasts a similar headlight configuration to the Jeep Cherokee; the top Taycan-style lights are DRLs; the middle lights are headlights that give the Macan Electric a neat rally-driving light-like effect; and the bottom lights are fogs. The camouflaged prototype sported a grille-mimicking decal on the front bumper, but we won’t be surprised to see a grilleless bumper there on the production version. Beneath the bumper is a large opening for cooling, with a centrally mounted sensor suite to support advanced driver assist systems. Around back, the Macan Electric appears to have taillights similar to the Taycan Cross Turismo’s, and it features a popout spoiler that emerges from the stubby rear deck.

Although the Macan Electric will likely never rival a Rivian R1S in off-road supremacy, Porsche says it will have an “off-road solution” for buyers who like to venture off the beaten path. Based on the sizzle reel Porsche showed us, something akin to the now-legendary Cayenne Transsyberia could be in the cards.

The company plans to officially reveal the 2024 Porsche Macan Electric in late 2023 or early 2024, with deliveries beginning sometime in 2024. In the meantime, it says it’s working hard on final calibrations and software tuning.