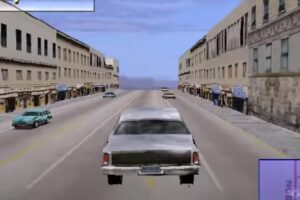 Driver was one of the greatest titles for the original Playstation. Car and gaming enthusiasts of a certain age will fondly remember popping the disc in that chunky, grey plastic box of magic and tearing around the pixellated 1970s streets of Miami, San Francisco, Los Angeles and New York.

That original game was never topped from either a critical or commercial standpoint, and while kinda/sorta rival series Grand Theft Auto went on to become a multiple record-breaking Goliath, Driver found itself mothballed. There hasn’t been a non-portable Driver release for 10 years, but finally, Ubisoft has announced the series’ return. As, erm, a live-action TV series.

This perhaps isn’t the Driver announcement fans of the series were waiting for. But who knows, perhaps renewed interest in the franchise will make something happen further down the line.

As for the show, it’ll be shown exclusively on Binge.com, described by Ubisoft as “an upcoming streaming platform showcasing original series and shows created for gaming fans”. The free platform, not to be confused with Australian service Binge, is set to launch in 2022. Thus far, Driver seems to be the only show announced for it.

There’s been talk of a live-action take on Driver for the best part of two decades, although the conversation has mostly revolved around a film. Given the failure of Ubisoft’s first film adaptation, 2016’s Assassin’s Creed, perhaps it’s a good thing that never happened.

Speaking about the upcoming TV series, Ubisoft Film & Television’s development boss for TV Danielle Kreinik said: “Our mission at Ubisoft is to bring our games to life in new and exciting ways and create content set in the world, culture, and community of gaming”. Allan Ungar of Binge.com added: “As longtime fans of the franchise, we’re excited to deliver an original, premium, and rich storytelling experience that will take fans and newcomers on a thrilling ride.”