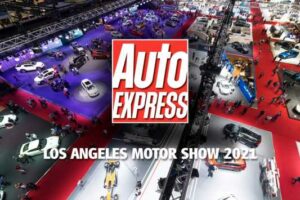 Electric SUVs take the spotlight at LA in 2021, but there are still new releases to excite enthusiasts

The Los Angeles Auto Show is back, following a pandemic-induced lay-off in 2020, and the car makers are putting on the glitz in tinseltown, with a wide range of new models and technologies on show.

So, whether you’re interested in fossil-fuelled motoring or think battery power is the way forward, there’s something for you.

However, it's no surprise that the spotlight shone on electric cars, and SUVs in particular, at this year's LA Auto Show. It's fascinating to watch how each manufacturer is tackling the transition from pistons to volts, but while striking concepts from Hyundai and Kia hint at how our future could look, a few soul-stirring models – powered by more conventional means – took to the stands in California, too. Here are the highlights, from both ends of the spectrum.

Kia hit the ground running with the EV6, its first bespoke electric car, and the Korean brand looks to continue that success with the EV9. The Concept EV9 that made its debut at the LA show demonstrated that the finished car will be a range-topping seven-seat SUV with a radical design. The concept’s boxy silhouette and origami-like surfacing will be watered down come production time, but given the brand’s recent track record, the EV9 should be a competitive package.

Since the Cayman was introduced in 2005, enthusiasts wondered what Porsche’s sweetly balanced coupe would be capable of with the wick turned up. The spell-binding GT4 provided an answer, and now Porsche’s GT department has given the Cayman the full Renn Sport treatment. The GT4 RS gets the 911 GT3’s 9000rpm atmospheric flat-six, a hardcore chassis and more extreme aero. There’s no manual gearbox option, but Porsche’s snappy PDK dual-clutch should suffice.

Tesla could have quite a fight on its hands when the Fisker Ocean launches in 2023. With the range-topping model producing 543bhp and offering more than 350 miles of range, the numbers are certainly strong, and the styling has caught our attention as well, unsurprisingly for a marque headed by a former Aston Martin designer. The Ocean is bold, and with its imposing stance and simple bodylines, it certainly has the show to match all that go.

Hyundai is set to continue its EV onslaught with the Ioniq 7, a large seven-seat SUV riding on the brand’s E-GMP platform that underpins the Ioniq 5 and Kia EV6. The Ioniq SEVEN concept previews the upcoming flagship, with a striking design and more than 300 miles of range. The concept’s squared-off silhouette and ‘parametric pixel’ lighting setup could make it to showrooms, but the lounge-like interior will not.

In the past, Porsche’s GTS models have marked a goldilocks zone in the range, with sharper dynamics than lesser models, plus a more affordable price (and increased usability) over fully fledged GT cars. The Taycan is the latest to gain the GTS moniker, with a bespoke adaptive air suspension setup and an optional rear-axle steering system with a more athletic calibration. With 590bhp and 850Nm of torque, the GTS won’t hang around on the straights, either, and new Sport Turismo estate bodystyle adds a dash of practicality to the Taycan line-up.

Alongside its Solterra electric SUV, Subaru showcased the latest incarnation of the iconic WRX at LA this year. Sacrificing none of the rough-and-ready character of previous generations, the new WRX promises to stretch the performance of Subaru’s rally-inspired saloon further than ever. A larger 2.4-litre turbocharged flat-four produces 267bhp, and should deliver the boxer-engine burble that has defined the WRX for years. Riding on a new, stiffer chassis and with suspension that’s supposedly more capable over rough terrain, the WRX should be a step on from the old model. Unfortunately, the brand has no plans to sell it in the UK.

Toyota is the one of two Japanese marques to introduce its first-ever EV at the LA show, along with Subaru. The Toyota bZ4X leads the firm’s electric car offensive and shares its e-TNGA platform with the Subaru Solterra. It’s slightly smaller than the Toyota RAV4, but has a 165mm-longer wheelbase and clever packaging, so should feel spacious inside. Single- or dual-motor configurations will be available, with 201bhp and 215bhp respectively, with a claimed range of 280 miles.

The all-new, fifth-generation Range Rover landed with a bang earlier this year, so it’s no surprise that the ultra-luxurious flagship SUV drew crowds at the LA show this year. With a new minimalist design language, plug-in hybrid powertrains and a seven-seat option for the first time, the new model looks to build on the blend of opulence with versatility that defines the Range Rover brand. A fully electric variant will arrive in 2024, but in the meantime, a 4.4-litre twin-turbocharged V8 with 523bhp should deliver the goods.