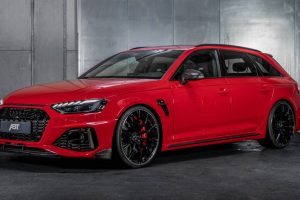 Remember Abt Sportsline’s first modified facelift RS4? Despite power rising impressively to 523bhp, it was pretty subtle – aside from some new wheels, carbon fibre gills and a CFRP rear spoiler, it was all as per the standard RS4. This one, however, takes things a step further.

It’s the RS4-S, and although it’s not as outlandish as the vehicles in Abt’s thoroughly silly -R sub-brand, there’s still a lot to take in.

It’s been given a carbon fibre ‘Abt Aerokit’, which includes a front splitter and rear diffuser with RS4-S badging (in red, of course) and a new boot spoiler. Poking out of that carbon-infused rear-end are four 102mm wide tailpipes, finished in – you guessed it – carbon fibre. Gloss black 21-inch ‘Abt Sport GR’ wheels complete the look.

To give some go to match the show, the Abt Engine Control unit raises the power from the RS4’s 2.9-litre twin-turbo V6 from 444bhp to 530bhp, while the torque jumps from 443lb ft to 487lb ft. The resulting 0-62mph time of 3.9 seconds is not to be sniffed at, but anyone wishing to go further can plump for the Abt Power S pack, giving 523bhp and 502lb ft of torque.