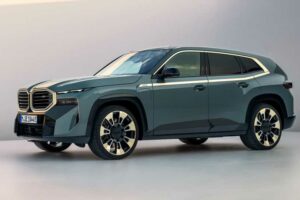 We were introduced to the Concept XM just short of this time last year, and now BMW M’s first plug-in hybrid, the 2023 BMW XM, is entering reality as a five-seat performance SUV with an electrified 4.4-liter twin-turbo V-8 and the ability to be plugged in for some EV-only driving range. That combination—SUV, plug-in hybrid, and, we should add, somewhat odd looks—might be controversial for the BMW faithful, especially when bundled on an M-badged vehicle. Yet the XM has plenty to overwhelm regular folks with, too, including a wild interior design, gold exterior trim, and its nearly $160,000 price tag.

The idea of a high-performance hybrid is no longer “wild” on its own, as the tech has headlined Formula 1 racing for years now and has gradually slid into the mainstream in cars and SUVs alike. Porsche’s Cayenne Turbo S E-Hybrid, for example, has taken over the top spot in that sporty SUV’s lineup, and Mercedes-AMG is transforming its previously V-8-only C63 sedan into an electrified, four-cylinder plug-in monster. So, BMW’s M performance division is mildly tardy to the German power-hybrid zeitgeist.

BMW hasn’t broken the mold with its first plug-in hybrid M car, either. This hybrid system works similarly to the mild-hybrid setup in the three-row 2023 BMW X7 M60. It combines BMW’s 4.4-liter twin turbo V-8 pumping out 483 hp and 479 lb-ft of torque with an electric motor integrated into the eight-speed M Steptronic transmission. This 194-hp, 207-lb-ft electric motor gets its power from a 317-volt battery pack with a 25.7-kWh capacity; it can be charged using a 7.4-kW AC charger from empty to full in 3.25 hours (or it can be re-juiced on the go via regenerative braking), and enables the XM to travel up to 30 miles on electric power alone. Combined, the e-motor and the V-8 spit out 644 hp and 590 lb-ft of torque.

Whether running on electricity or a blend of gas and electric power, the XM turns all four wheels with an M-tuned xDrive all-wheel-drive system. The traction xDrive affords helps the hybrid powertrain (along with launch control) punt the XM to 60 mph in a claimed 4.1 seconds. Top speed is limited to 155 mph but can be increased to 168 mph with the optional M Driver’s Package added; of course, with only the e-motor running, the XM’s top speed lowers to a more pedestrian 87 mph.

To help the XM change direction with M-like authority, it has a 50-50 front-to-rear weight distribution. Also, there is an M Sport rear differential that allows for fully variable distribution of drive power between the left and right wheels. Otherwise known as torque vectoring, the diff can send power to the outside rear wheel to reduce understeer through corners, and it also works in conjunction with the M xDrive and stability control to help keep the XM pointed where the driver wants it to go. Some additional turning assistance comes in the form of BMW’s Integral Active Steering, which turns the rear wheels against the fronts for tight, low-speed maneuvers, increases agility at more moderate speeds, and gives you confidence at high speeds and lane changing (when the rear wheels move in phase with the fronts).

The use of sheet steel in the rear suspension links, along with an aluminum subframe and wheel carriers and forged upper control arms, helps reduce weight. But most interesting is that the XM does not use air springs, as does the X7. This not only further reduces mass, but also gives the suspension more consistent feel. The front springs are linear (with a single rate through the spring’s full travel) while the rear suspension uses progressive springs, which offers better ride comfort and improved traction with its standard electronically adaptive dampers.

More surprising than the conventional springs? The XM’s use of massive 23-inch wheels with 275/35R23 front and 315/30R23 rear tires. Those rims and that suspension must contend with the XM’s 6,062-pound (three-ton!) curb weight—surely no easy feat when it comes to keeping the ride comfortable.

Like the new X7 and 7 Series/i7 sedans, the XM adopts BMW’s new-look, split headlights and running lights. (The primary headlights live below the brow-like LED accent lighting up near the hood.) The grilles also feature LED lighting surrounds framed by gloss-black trim; the same black trim also is used for the unusual trim strips that starts from each front fender and flow back under the glass and up into the rear roof pillars.

You might be looking at the pictures here thinking “gloss black? Does MotorTrend need its eyes checked?” No, we do not—you’re looking at the optional “NightGold Metallic” exterior trim, which changes the side window trim, outer grille border, and surrounds in the rear diffuser from black to a stunning gold finish. The 23-inch wheels can also be finished in bi-color finish with black and NightGold, but both color options come with a unique hub cover with “BMW” lettering. All models also get the quad hexagonal exhaust outlets that flank each side of the rear diffuser. The XM’s underbody benefits from a flat-bottom design and includes specialized, aerodynamic paneling on the suspension arms to achieve low drag and improve overall aerodynamic performance.

The XM’s cabin is very close to the Concept XM’s interior, including the sculptural headliner made from Alcantara with fiber-optic lighting, the couch-like M Lounge rear seating, and the optional use of vintage coffee upper trim and Deep Lagoon Full Merino leather upholsteries. Fortunately, the standard XM interior comes in traditional material combinations with Black Nappa leather on the instrument panel and upper door cards, black Alcantara on the A-, B-, and C-pillars, and Black Merino leather on practically all other surfaces with gray contrasting stitching throughout. You can also get the Merino leather in Sakhir Orange for the seats, center console, lower instrument panel, and door trim panels while Black Nappa leather is used on the dashboard and upper door trim. Finally, you can get the Vintage Coffee Merino leather with Silverstone rather than the Deep Lagoon coloring.

Another colorway option for the XM cabin is Label Red, but it is only available for the first quarter of 2023 and will be one of a series of XM “Label” models. All Label models will be limited editions offered for brief periods. The Label Red bumps up the power of the XM’s PHEV system to 725 hp and 735 lb-ft of torque and gets unique paint, wheel, upholstery and trim selections. The XM Label Red is planned to go into production in summer of 2023 and details on how to order one will come before it goes on sale.

Production of the regular 2023 BMW XM is scheduled to start later in 2022 at BMW’s Spartanburg Plant South Carolina. It will have a starting MSRP of $159,995 while the 2023 BMW MX Label Red is priced at $185,995. Will people take to the styling? The performance? Both? Based on our (satisfying) drive in a prototype, the XM should be a mighty thing to wield on a fast road or even a track. But like many things from BMW of late, it pushes boldly into new territory for the brand.