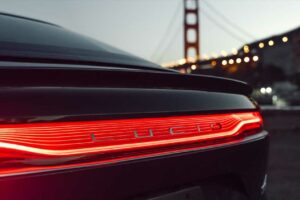 Years ago when Lucid Motors’ CEO and CTO Peter Rawlinson was hired by the nascent Tesla Motors as VP of vehicle engineering, he longed to leverage the myriad packaging advantages of an electric drivetrain and rethink the Model S’ overall shape and silhouette. But Musk proved unwilling to alter a millimeter of Franz von Holzhausen’s attractive yet conventional Model S design. With the Lucid Air electric luxury sedan, our 2022 Car of the Year, Rawlinson finally has the opportunity to realize his dream of placing a full-size Mercedes-Benz S-Class limo’s interior package in roughly the size envelope of the midsize E-Class, while improving on luggage capacity by providing both a clamshell trunk that can swallow golf bags and a roomy frunk. The job of making a car that lacks the traditional long hood and luxuriant dash-to-axle dimension look ritzy fell to Derek Jenkins, recently of Mazda (MX-5) and VW/Audi (A2 and Microbus concepts). Jenkins’ only constraint was that no design element conflicted with the aerodynamics required to achieve Rawlinson’s 500-mile range goal.

So About That Aero-Styling Interplay …

Jenkins took advantage of the compact powertrain to employ a very low cowl and low roofline, two moves essential to minimizing frontal area for low drag. The low cowl maximizes the visual length of the hood and avoids the jellybean look you see on the Mercedes EQS.

His use of concave surfacing on the side mimics the overall profile shape, and along with an arc of black rocker panel area reaching up into the body side, it helps slim the profile view. And despite the fast rear window angle, Lucid sidestepped the potential noise problems of a hatchback but innovated the trunk with an incredibly wide-opening decklid that facilitates loading of wide items like golf clubs. Similarly, up front, a clamshell hood that incorporates the tops of the wheel openings provides a low lift-over with clean surfacing in front.

No element of the Air’s upper or underbody escaped Monnet’s fanatical attention, and several of his innovations mark firsts in the road car space. Many of these involve leveraging wind vortices—mini tornados. Together they result in a drag coefficient of 0.200—a remarkable number for a roomy sedan that, when multiplied by the car’s modest frontal area, produces the rare result of a battery electric vehicle whose EPA highway efficiency rating tops its city figures (for most models). The Audi E-Tron GT and Porsche Taycan also achieve this using two-speed transmissions, but their highway figures are 36 percent lower than the Lucid Air’s.

Despite the Air’s horsepower and the motor and battery heat created, the Lucid Air can handle all powertrain and cabin cooling via two modestly sized heat exchangers positioned just ahead of each front tire. The cooling air for each enters via ducts near the center of the lower grille opening (which can be closed off via grille shutters when less cooling is needed). That air flows up into two horizontal cylindrical ducts, inducing a vortex in each. This creates a negative pressure gradient that actually helps suck more air into the duct (one of the secrets of the Dyson vacuum). The shape of the duct also helps keep airflow attached to the sides as the round duct transitions to meet the rectangular radiator. This ensures that every square millimeter of the heat exchanger gets blasted with cooling air.

As the air exits the radiators, louvers in the wheelwell liner direct it out toward the sides of the car, not underneath where it could interfere with the action of the diffuser. Note that keeping the radiators out of the front center of the vehicle was a huge enabler of the Lucid Air’s huge 9.9-cubic-foot frunk; the other is its ultra-compact LED headlamp package.

The most drag-efficient way to minimize vehicle lift is by optimizing underbody airflow and expanding it toward the rear with a diffuser. The Lucid Air’s underbody is extremely smooth, utilizing smooth-face fasteners or caps to cover larger bolts.

Airflow fences start small roughly midway underneath the sedan and run to the rear, serving to separate air from the sides of the body from the air flowing under the centerline through the diffuser’s venturi that creates the low pressure. These fences get taller as the diffuser opens at the rear, and the curved edges where they meet the underbody tray are radiused to encourage vortex formation, which helps keep flow attached in this area, as well.

To relieve “stagnation pressure” that builds up along the front “grille” area, there are tiny ducts formed by the tops of the headlamps, which allow this pressure to pass through and exit via vents on the hood, cooling the LED headlamps in the process. And although those air curtain vents that channel air flowing through the foglamp area so that it stays attached over the face of the wheels have become ubiquitous now, the Lucid ducts work with the fascia surface to form a wing shape that actually induces a “thrust vector” forward. That’s right, it creates a negative drag of up to 40 pounds at higher speeds.