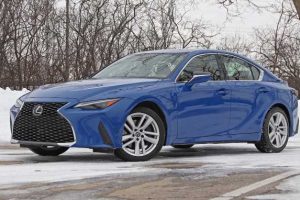 Is Lexus underreporting the IS300 AWD’s peak power? We didn’t have the opportunity to run our IS300 AWD test car on the dyno, however, a Lexus representative informed us in an email that the “V-6 in the IS350 and IS300 AWD differ in various aspects of engine tuning in order to achieve the best possible performance for the respective IS RWD or AWD system. “

For argument’s sake, let’s presume our IS300 AWD test car was an especially ripe example that also benefitted from superior testing conditions (after all, we tested the IS300 AWD nearly four months after we took the IS350 F Sport to the track). If this assumption holds true, then there’s still a reasonable argument for dropping an extra $1,900 or $3,900 on a rear- or all-wheel-drive IS350, right?

Well, if you find the IS350’s accompanying F Sport kit especially compelling, then you may want to spend the extra coin on the pricier model, but if you’re simply after straight-line speed, then you’re probably better off saving money and springing for an IS300 AWD. Why? Because a few hundred greenbacks ought to eke out IS350-like horsepower from the IS300 AWD’s V-6 engine.

“The only thing [Lexus is] doing is they are actually limiting throttle [on the IS300 AWD],” Rafi Raban, owner of RR Racing, told us over the phone. Raban’s company sells various performance parts for a number of different makes and models, including the Lexus IS.

In fact, RR Racing markets multiple engine control unit (ECU) tunes for a number of IS models running the 2GR-FSE 3.5-liter V-6, an engine Lexus pulled from the model after the 2017 model year. The sub-$600 tunes (not including potential setup costs) promise to coax IS350-rivaling power and torque from the IS300 AWD’s 2GR-FSE engine.

The engine bays of model-year 2018 and newer IS300 AWD and IS350 variants, meanwhile, house the brand’s more powerful 2GR-FKS 3.5-liter V-6, an engine which RR Racing has yet to develop a saleable ECU tune for. Raban, however, is confident his company can work the same magic it applies to the 2GR-FSE in older IS300 AWD models to the 2GR-FKS engine that powers the current IS300 AWD.

“We can do it,” he said, “we just haven’t had anybody [loan us a 2GR-FKS-equipped IS300 AWD].” According to Raban, RR Racing needs a few days with the car to “do a lot of the development” necessary to create a saleable and verifiable tune for IS300 AWD sedans (and RC300 AWD coupes) with the 2GR-FKS engine.

“It’s hard sometimes to find an owner locally that can leave a car [with us for that long],” Raban added. “Most of these cars are daily drivers for people. “

Raban’s not the only tuner facing this issue. Dennis Knatt, the owner of D3 Performance, shared that his inability to get hold of a newer IS300 AWD is preventing him from developing and selling a performance tuner for the model to complement the $600 unit he currently sells for newer IS350’s with the 2GR-FKS engine. Like Raban, Knatt expressed no doubts that his company can squeeze IS350-levels of power out of the 2GR-FKS that motivates today’s IS300 AWD.

As our test numbers reveal, the stock 2021 Lexus IS300 AWD is already a performance bargain compared to its IS350 kin. The fact spending a few hundred dollars on an ECU tune ought to unlock even more power from the IS300 AWD’s V-6 engine only makes it harder to justify spending thousands more on a 2021 Lexus IS350 under the pretense of its dynamic superiority alone.

If a modern-day sleeper sport sedan is what you’re after, then look no further than the 2021 Lexus IS300 AWD, which hides the heart of the powerful IS350 under the tamer bodywork of the more modest IS300.