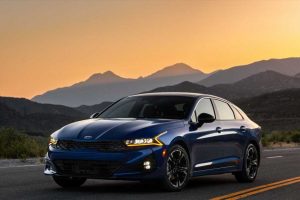 Conventional wisdom says that 300 horsepower is about the practical limit for a front-wheel-drive car. It’s all about basic physics: When a car accelerates, its weight shifts to the rear, and that’s not ideal when the front tires are trying to drag the car around (and even less so if those tormented contact patches are also trying to cope with steering inputs). Certain front-drive cars manage to breach the 300-hp threshold and acceptably get away with it, and by “certain” we mean the Honda Civic Type R. The new 290-hp Kia K5 GT, on the other hand, is more like the 2006 Chevy Impala SS, which is another front-wheel-drive car that ran to 60 mph in less than six seconds and was less than poised doing so.

This problem is twofold. First, the Kia’s turbocharged 2.5-liter inline-four is a beast, generating 311 pound-feet of torque at only 1650 rpm. There’s nary any lag between the moment your right foot goes down and the next thing that happens, which is usually an extended dialog between the traction-control system and the front tires concerning the dispiriting delta between wheel speed and vehicle speed. That is, unless you’re in Sport Plus mode, which disables the traction control. Then you’re just frying the tires. In the rain, you can find yourself casually generating massive wheelspin at 45 mph, just like you might in, say, a Mercedes-AMG SL65.

Which brings us to the second part of the K5 GT conundrum, which is that Kia hasn’t done anything in particular to help the car deploy its furious power. If the equation is 290 horsepower plus X equals forward progress, the K5 is chewing on its pencil, stumped. How about stickier tires? Or all-wheel drive? The K5 GT-Line—with 110 fewer horsepower than the GT—is available with all-wheel drive. Huh. Must be nice.

Our K5 GT test car rode on 19-inch 245/40R-19 Pirelli P Zero All Season tires. We reckon that summer tires would knock a couple tenths of a second off the GT’s 5.2-second 60-mph run. And we’re pretty sure about that because the K5’s mechanical doppelganger, the Hyundai Sonata N Line, hits that mark in 5.0 seconds flat on summer tires. Besides summer rubber, summer itself might help. In frigid Michigan February temperatures, our K5 GT’s best straight-line runs happened after a drag-strip-style burnout session to warm up the tires and clean them off.

That went for the 5-to-60-mph runs, too. Normally, when a car’s rolling-start time is really close to its 60-mph time, that signifies a responsive engine. Here, the K5’s 5-to-60-mph time—just 5.5 seconds, 0.3 second slower than its standing-start sprint—merely demonstrates that the Kia is fighting ferocious wheelspin whether you launch from rest or a rolling start. But also, yes, it has a really responsive engine. You just need to look a little farther down the test results to find numbers that take traction out of the equation. For instance: 60 to 90 mph during its acceleration run requires just 4.9 seconds. Passing on two-lanes will not be a problem.

The K5 GT also gets an overachieving automatic transmission, a new eight-speed wet-dual-clutch unit that offers launch control and silky rev-matched downshifts. This is a case where the shift paddles on the steering wheel are actually useful rather than focus-group signifiers of sportiness. Compared to the lesser GT-Line—which uses a conventional torque-converter automatic—the GT also gets bigger brakes, quicker steering, and an ostensibly performance-oriented suspension tune. Its tires are slightly wider with skinnier sidewalls. But the K5 GT doesn’t feel like a sporty car. It feels like the kind of tuner car where someone went all in on the engine and then ran out of money to do anything else.

If the K5 GT isn’t exactly well-rounded, it does deliver a whole lot of sneaky family-car speed for $31,585 to start. Our test car included the $4000 GT1 package, which gave it a 10.3-inch touchscreen with navigation, Bose audio, ventilated front seats (heated seats are standard), and a mess of other goodies. At the as-tested price of $35,835, the K5 GT is a good deal for a car this quick and luxurious. But it’s also more expensive than another rapid sedan that we like a whole lot—Kia’s own Stinger, which carries a base price of $34,135 in rear-wheel-drive GT-Line form. The base Stinger employs a 255-hp 2.0-liter turbo-four, and its 60-mph run (6.0 seconds) lags behind the K5 GT’s time. But it’s far more composed getting there, and the Stinger would likely walk away from the K5 on a challenging road. In the Kia showroom, $34K or so apparently buys you horsepower or handling but not both at the same time.

The K5 GT is a well-designed package, handsome inside and out. But it’s not quite finished. Whether Kia gives it all-wheel drive or better tires, the GT needs more traction. Until then, roast ’em if you got ’em.