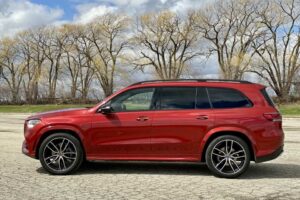 The bold and the beautiful still airs on the 2022 Mercedes-Benz GLS 450. With all the style and none of the drama of a certain soap opera, the seven-seat SUV formerly known as the GL has been giving luxury car shoppers a full-size option since 2006. The GLS-Class fends off relative upstarts such as the BMW X7 and redesigned 2022 Lexus LX600, while prodding the Cadillac Escalade and Lincoln Navigator to even greater luxury.

It’s remarkable that the GLS costs the same as its American-made rivals. With a towing capacity of 7,700 lb, the unibody SUV is nearly as capable as its truck-based rivals, and it’s more manageable and more luxurious while still allowing plenty of space for six with second-row captain’s chairs like my tester. That adds up to a high TCC Rating of 7.4 out of 10.

At the onset of the 2022 model year, Mercedes withheld its twin-turbo V-8 engines due to the double whammy of supply constraints and chip shortages. In February of this year, it was reported Mercedes brilliant 4.0-liter V-8 could be ordered in most of its SUVs. Months later, the rollout of the 2022 GLS 580 with the V-8 has been hampered to certain areas and a Mercedes spokesperson said they can’t predict when it will be available nationwide. In most zip codes I tried on Mercedes’ online configurator, only the GLS 450 with the 3.0-liter turbo-6 was available.

The inline-6 is no slouch. In my week of highway and suburban testing around Chicagoland, it never lacked for power or grace. Here’s where else the 2022 GLS 450 hit and missed.

To get a 5,400-lb gas SUV to hit 60 mph in less than six seconds requires some engineering wizardry. A 48-volt mild-hybrid system acts as a twofer to supplement power or conserve fuel. The starter generator boosts the engine for short periods, adding 21 hp in bursts and neutralizing turbo lag, or cuts off the engine when coasting to save fuel. The turbocharged 3.0-liter inline-6 lacks the muscle of a V-8 but it doesn’t lack the hustle. It makes 362 hp and the 369 lb-ft of torque comes on as early as 1,600 rpm. A smooth 9-speed automatic has shift points that can be modulated with drive modes, and Sport mode keeps it eager without being overly sensitive.

The air suspension handles the big and easy without ever wafting like a boat, and in spirited driving it counters the SUV’s prodigious proportions. Mercedes no longer offers its even shiftier active body control system on the GLS 450 (powered by the 48-volt system as well), but it’s still controlled and planted. With winter receding, however, the roughest roads still rocked those 23-inch wheels on my tester.

For $4,350, Mercedes will paint the otherwise black wheel arches the same color as the body and upgrade the standard 20-inch wheels to 21-inch five-spoke AMG wheels. My tester came with a 23-inch set, which required $3,150 more plus the AMG Line, or $7,500 total for the big wheels. That’s nearly a 10% upcharge on a $78,000 SUV. They look pretty sweet though, especially when wrapped in low-profile Pirelli P-Zero PZ4 summer tires.

The EPA-rated 18 mpg city, 24 highway, 20 combined could just as easily be a hit for the outgoing era of internal combustion engines, but for the plug-in hybrid and battery electric three-row SUVs on the horizon, such as Mercedes’ own EQS SUV. The BMW X7 does it 1 mpg better, and the Volvo XC90 is better, even without the plug-in hybrid option. Still, the GLS 450 is more efficient than the new Lexus LX 600 or larger Lincoln Navigator.

There’s no denying the size of Mercedes’ largest passenger vehicle sold here, but it doesn’t veer into the truck-like cartoonery of many large SUVs. It wears Mercedes aviator design cues and clean lines with stateliness, with the confidence of a general instead of the brashness of a conqueror.

The 64-way ambient lighting underlining the gorgeous wood dash and stretching out to the door panels and sills reminds me of a basement discotheque in Europe’s capital cities. There, the neon stripping gives it a pumping vibe, and takes the eyes away from the desperate basement walls. Mercedes has nothing to hide with its sumptuous interiors, so the ambient lighting takes away instead of adds. Fortunately, there’s enough hues to downgrade the vibes from pumping to warm.

The only way Mercedes could make accessing the third row any easier would be if they picked you up and plopped you down. Any human of any age could touch the power button on the seat top of the second row captain’s chair and marvel as the front seat moves forward as the headrest on the captain’s chair collapses and the seat slides forward then tumbles for maximum access to the two seats in the back. The only downside is you have to hold the button for the full return.

In the six-seat configuration of my tester, with captain’s chairs in the second row, there was enough head and leg room to fit six adults of generous sizes. Power fold from the rear cargo area keeps it easy, and the 17.4 cubic feet of cargo space behind the third row is enough to hold the gear for a youth sports weekend. It grows to 42.7 cubic feet with the third row folded. If that’s not enough, consider GM’s suite of full-size SUVs.