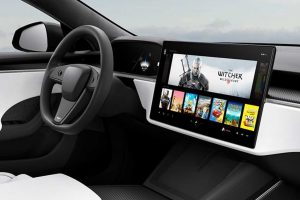 Remember the good old days? You know, the time when putting your automatic car into gear meant positioning a lever so that it lined up with the letters D or R?

Oh, the automakers tried to complicate our lives by using D for “drive” instead of F for “forward” (after all, “forward” is the opposite of “reverse”, right?), and putting R toward the top of the lever’s options and D toward the back. Still, though this seemingly foolproof design has led to the demise of many, many garage doors over the decades, generally even the most dim-witted or mildly inebriated among us could generally figure out how to get their cars going in the desired direction.

Since the arrival of the 2002 BMW 7 Series, it seems automakers are on a mission to overcomplicate what should be a mindless task by equipping various vehicles with a succession of electronic levers that must be tugged, slid, pushed, pulled, rotated, or prayed to in the most inconceivable patterns.

According to a tweet by Twitter user Tesla Owners Silicon Valley, Tesla has come up with a new and even more complex shifting mechanism for the 2021.5 Model S and Model X: the touchscreen. The updated Tesla model’s center screens seem to feature an icon of the car on the left side of the display, which users then drag up to put the car in drive and drag down to put it in reverse.

At first glance, the setup seems elegantly simple. Look closer, though, and you’ll likely stumble on a few flaws. For one, the uninitiated, such as a valet, may never think to look to the touchscreen for this function. Curse all you want at the strange shifters other automakers have developed over the years, but at least these setups are generally located in typical spots such as the steering column or center console.

Problem number two—the real problem, the one the government and mainstream media don’t want you to know about—is that touch-screens can fail. Let’s rephrase this: The touchscreen will fail. In fact, Tesla’s most recent recall was due to just such an issue, as Tesla sent about 135,000 cars out of its factory doors with an NVidia Tegra 3 chip with a lifetime of about 3,000 program-erase cycles. Translated to human time, that’s about five-to-six years of driving before the screen finally went to the big dashboard in the sky.

Bear in mind this led to a government-mandated recall because, in a Tesla, no screen means no access to functions such as the hazard lights and front and rear defrosters, all of which require easy access by law. And which vehicles were affected by this recall? You guessed it: the Model S and Model X. In other words, the very same models that get this new shifting paradigm.

That said, it seems this is the override function Elon Musk referred to when he tweeted, “No gear shifter, no turn signals, no problem. No more stalks. Car guesses drive direction based on what obstacles it sees, context & nav map. You can override on a touchscreen.”

Alright, maybe this is kind of cool. That said, it also seems like something prone to going really, really wrong. For instance, how’s a Model S or Model X driver to go from drive to reverse (or vice versa) if the touchscreen calls it quits in the middle of a drive? Will the touchscreen gear selector work if the driver’s wearing gloves? These questions and more will hopefully be answered once we get finally get our hands on an updated Model S or Model X.