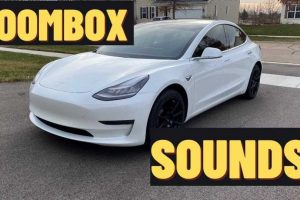 Tesla has many features that can save the day, but this is a bit fun and unexpected.

Tesla CEO Elon Musk is known to have a sort of dry sense of humor, and the brand’s cars are also capable of some silly features. C’mon, what other car can fart? If you want to open your Tesla’s trunk, the voice command “Open my butthole” will do the trick. Heck, it was just announced that Musk will host Saturday Night Live in a few weeks, so there must be some people out there who like this sort of toilet humor.

At any rate, sometimes car features work in ways people don’t expect. And, this may be especially true when and if the feature catches them by surprise. A recent story on the Tesla Model 3 Reddit subreddit – posted by user u/fokized and shared by Teslarati – explains this exact situation. u/fokized posted:

“Yesterday I got cut off super hard by a Tahoe when getting off an off-ramp. I was so pissed I slammed the horn and was prepared to tell the guy to learn how to drive. La Cucaracha went off.

I was confused at first then started laughing my ass off and got a stare from another car, road rage was subsided. I smiled at the guy at the light and honked the horn again and the sound was still going as I sped off the green light. I think we will both remember that moment for a long time.”

Tesla’s “Boombox” mode was added as an over-the-air software update in 2020, around Christmas time. Essentially, the feature lets you change the sound your Tesla makes while driving, swap out the car’s horn sound, or play loud music from the car, much like a boombox.

Imagine if you either forgot that you changed the sound of your horn, or perhaps another member of your family changed the settings without alerting you. You proceed to honk the horn, not expecting some crazy sound, but instead, you end up with something ridiculous blaring from your car for a period of time. This could work against you if it angered an aggressive driver, but it could also work in your favor to lighten the situation.

Other folks chime in on Reddit with related stories. You can check out the thread by following the link at the bottom of the article. Below are just a few replies from the subreddit:

“Girlfriend changed it to the dj horn. Someone wasn’t going on a green for over 3 seconds so I lightly tapped the horn. This was beside a bus/subway terminal. Everyone looked over and I was so embarrassed. Lol.”

To learn more about Tesla’s Boombox mode and the sounds it’s capable of, check out the video below.

When you’re finished watching, scroll down and leave us a comment.