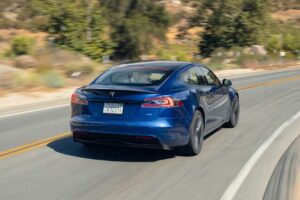 Back in October, Tesla rolled out the latest version of its Full Self Driving (FSD) upgrade to its Autopilot driver assistance system, v.10.2, which included some updates and enhancements. The update was only open to drivers with a very high Safety Score, the company’s proprietary ranking system it uses, in this case, to parcel out access to FSD. The latest update, v.10.3, seemed like it would roll out in the same manner—via over-the-air updates to top Safety Score owners—until there was a snag.

The update dropped late on Friday, but by Saturday morning issues were beginning to crop up. As Elon Musk tweeted in the morning, there were issues with left turns at traffic lights, but anecdotally many other FSD v.10.3 users were reporting other serious issues, such as inappropriate emergency braking activation. By midday, Musk took to Twitter to announce the company would roll back to 10.2 until a fix for at least the left turn issue could be completed.

FSD v.10.3, judging by the version release notes we’ve looked over, contained a number of enhancements, claiming to improve (for example) the ability to identify brake or hazard lights, and allowing the system to call for more acceleration when merging or changing lanes. But it also included the ability for owners to customize certain aspects of how FSD behaves, and save it to their profiles. One such setting is, apparently, the ability to conduct a rolling stop. It’s not clear what the use case for such a setting is, but a Tesla with Full Self Driving activated conducting a rolling stop at a stop sign would be highly problematic.

By early Monday morning, a new version was shipping to Beta participants, called v.10.3.1. What exactly the latest version fixes, or indeed what was specifically at issue with v.10.3, remains opaque. We’ll have to wait and see how v.10.3.1 plays out on the road, and get our hands on its release notes, to determine exactly what happened. Until then, our advice is to treat Full Self Driving with caution and alertness.

Remember, however it’s marketed, Tesla’s Autopilot with Full Self Driving is not, in any way, a fully self-driving vehicle. It’s a driver assistance system that requires drivers both pay attention to the road and be ready to take control of the wheel (or yoke) in any instance—called a handover—the system is incapable of continuing its normal operation for any number of reasons. Moreover, it’s a system in Beta, which means that it is still under active development and that its releases are not necessarily free of bugs, as we see in the bungled v.10.3 release.