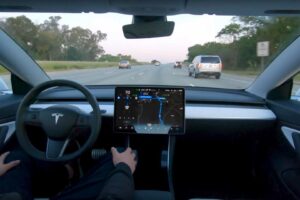 Tesla no longer requires drivers who are part of its Full Self-Driving Beta program to sign a non-disclosure agreement.

Following Elon Musk’s announcement at the 2021 Code Conference, Tesla has formally dropped the NDAs with the rollout of FSD Beta 10.2.

The company’s CEO confirmed the removal of NDAs for FSD Beta testers on Twitter. In a reply to a longtime member of the FSD Beta test group, Elon Musk joked that the NDAs would be available in perforated rolls.

This is confirmation that the FSD Beta program’s NDAs are gone and the chances for them to come back are slim. FSD Beta testers who just received the 10.2 update have also confirmed that no NDA could be seen in Tesla’s documentation for the program.

Still, the question remains why Tesla required NDAs for its FSD Beta testers prior to the V10.2 release, and Elon Musk sort of addressed that during his segment at the 2021 Code Conference. The executive said that it would probably be better if the FSD Beta program had no NDA to begin with since most testers seem to be ignoring it anyway.

“Yeah, I don’t know why there’s an NDA. We probably don’t need it. I feel like we’ll just be ignoring it anyway, so I don’t think it matters.”

Tesla recently came under fire for asking FSD Beta testers to sign NDAs. Media outlet VICE ran an expose last month in which it claimed that the goal with the NDAs was to shield Tesla from criticism. The story suggested that Tesla’s NDA encouraged FSD Beta testers to only share positive reviews of the advanced driver assistance system’s performance.

Nevertheless, a superficial online search proves that is not necessarily accurate as many videos of FSD Beta’s failures are online for everyone to see.