Tesla's First Supercharger Soon Will Be Closed To The Public 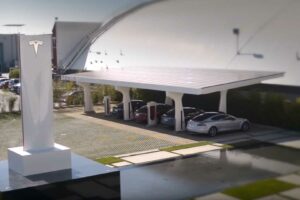 It was one of the first six stations, launched in September 2012.

Tesla will soon close to the public the Supercharging station unveiled by Elon Musk during the Supercharger Event on September 24, 2012. It’s located at the company’s Design Studio and SpaceX’s headquarters in Hawthorne, California.

It was actually one of the six first stations that were made available to the public in October 2012 with an initial power output of nearly 100 kW (later increased to 120 kW, and more).

According to the photo and info provided by Reddit u/jamesf10603 (via Teslarati), the station will no longer be available to the public from July 19, 2021, but it’s expected that it will remain operational for Tesla/SpaceX’s employees.

Reportedly, the station was not listed in the car’s navigation for months, as Tesla directs users to other, nearby Supercharging sites.

The reason for closing the original Supercharging station to the general public was not announced. It might be related to too high traffic at the site or security reasons.

The station in Hawthorne was also a special one with a big Tesla sign and the first solar canopy. It took quite some time to see more roofed Supercharging stations.

Anyway, the Tesla Supercharging network is dense enough to handle the removal of some older stations from the list. Globally, the network includes over 2,700 stations and over 25,000 individual stalls (as of May 2021).

Tesla continues to expand the network in all directions – geographically, by increasing the number of stations, but also adding more stalls as well as increasing the peak power. The next move will be to offer a 300 kW peak, instead of 250 kW as of today (V3 Superchargers).

We are still waiting to find out whether the upcoming introduction of the Tesla Cybertruck will bring some changes to the network in terms of power and size (bigger vehicle, potentially used for towing), as well as for the new network of Tesla Megachargers for the upcoming Tesla Semi.