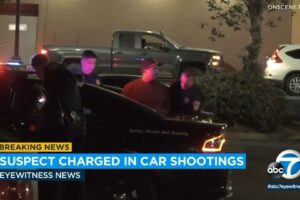 Reportedly, a man has been terrorizing California drivers with a BB gun.

According to a news report by ABC7 Eyewitness News out of Southern California, the police have filed charges against an Anaheim man for a series of attacks with a BB gun. Apparently, the 34-year-old man has been shooting BBs or pellets through car windows while driving on the freeway, essentially terrorizing people and making them possibly fear for their lives.

The news report exposes Jesse Leal Rodriguez as the person charged with three counts of attempted murder, as well as three counts of “assault on a person causing great bodily injury.” The shootings were reported in Riverside, Orange, and Los Angeles counties. The information shared on the newscast came directly from the Riverside County District Attorney’s Office.

The police involved in the investigation aren’t yet sure if Rodriguez was alone in the shootings, or if he had help. They are also still investigating whether he’s responsible for other, similar incidents. According to Teslarati, some 100 cars have had their windows shot by BBs or pellets in the three counties mentions above. This is only based on data collected since the middle of April.

Fortunately, Tesla’s built-in dashcam technology – coined TeslaCam – helped the authorities arrest Rodriguez. Based on reports, he terrorized a Tesla driver by shooting out the car’s windows in the area near Hamner Avenue and Hidden Valley Parkway in Norco. The TeslaCam footage revealed that the man’s vehicle is a red Chevrolet Trailblazer.

The police stopped a red Trailblazer, and eventually charged the man with the attempted murder of the three passengers in the Tesla vehicle. Teslarati notes that if Rodriguez is convicted, he could get a sentence of 57 years to life in prison. However, authorities expect that there may be more files charged against the man going forward.

Rodriguez has a history of related criminal activity, including convictions for carrying a loaded gun that wasn’t registered. He’s also been convicted for engaging in gang activity. He was out on parole for many years, and was even removed from parole over three years ago.