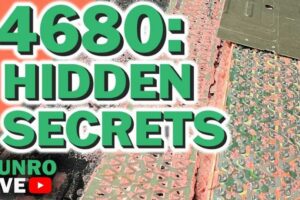 Munro Live‘s teardown of the Made-in-Texas (MIT) Tesla Model Y’s structural battery pack with 4680-type cylindrical cells is coming to an end, which prompted Cory Steuben and Sandy Munro to put out a summary.

As we can see, most of the cells have been extracted using a dry ice blaster to remove the pink polyurethane foam (only one out of four sections of battery cells is left), and basically all of the other components inside the pack were also disassembled.

Munro Live’s brief review of some of the individual parts is usually very positive, including aspects related to engineering, production (easy assembly), reliability, and quality.

There are many interesting solutions (compared to the 2170-type battery), including direct connections between cells and collector plates, without small wire bonds. Another thing was vulcanized seals on some aluminum elements, which are considered one of the best to minimize leak risk. It was noted also that Tesla used only a handful of fasteners for the sub-assembly of small parts.

The video is just a highlight from the shop, as the real stuff important for engineers and OEMs, like material and cost analysis, will be included in the upcoming reports. Sandy Munro announced also that there will be a new report that compares the new 4680-powered Tesla Model Y with the previous 2170-powered Tesla Model Y. That would actually be quite interesting to see what the potential is to lower costs with the new approach.

At the end of the video, the team teased some new things that just come from Europe – large format and complex structural carbon fiber parts, which might be used to build an entire car body using just several parts.