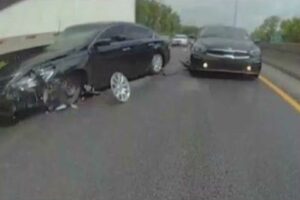 As drivers take back to our roadways, experts urge people to pay attention and remain vigilant.

A Tesla driver was driving down I-77 south near Uptown, North Carolina, when he saw a car crash under a semi-truck. His standard dashcam (TeslaCam) feature recorded footage of the crash, which he later shared with the local news.

The Tesla driver, Ben O’Morrow, said the crash occurred on Monday morning around the I-277 interchange. He noticed traffic slowing ahead, but the car that crashed was traveling quickly and seemed to fail to notice the cars slowing. He said:

“I saw a car behind him coming way too fast obviously.”

As you can see from the video above, a Nissan changes lanes and collides with the car behind O’Morrow’s Tesla. Then, it ends up underneath a passing semi, which completely crushes its passenger side and drags it down the highway briefly. O’Morrow says he sped up in an instant to make sure his car didn’t become victim to a collision as well.

There have been fewer drivers on our roadways since the COVID-19 pandemic accelerated last March. However, people are back to work, and the roads are busy again. Experts urge drivers to pay close attention, remain vigilant, and drive defensively.

Local attorney Jeremy Maddox noted that automotive fatalities are up 11 percent in North Carolina. He said:

“We expect that there will be more car wrecks this summer especially now that a lot of people are feeling safer to get out in the world.”

“It’s important to be aware of your surroundings. Checking your mirrors when making a lane change or turn.”

At the time of writing, WCNC Charlotte was still waiting for more details from the North Carolina State Highway Patrol.