Home » Car Reviews » Tesla Yoke Is Perfectly Legal For Use Across Europe, Including UK

Tesla Yoke Is Perfectly Legal For Use Across Europe, Including UK 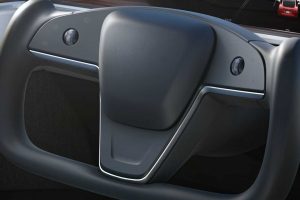 European regulations don’t really specify what shape a steering… device needs to be.

Many people who found Tesla’s steering wheel-replacing yoke a joke expressed their view that its shape may constitute a safety risk and that some governing bodies will outlaw it. Well, Europe has some of the most stringent regulations when it comes to what can go on a modern production car, yet there is nothing to stipulate that the apparatus you steer with needs to be round, or any specific shape, really.

The Sunday Times, whose aim was to see if the U-shaped yoke was legal in the United Kingdom (which it is), pointed to European Union regulations (still applied in post-Brexit Britain) that allow any shape helm as long as you can’t impale yourself on it in the event of a crash. This means that the yoke is legal not only in the UK, but throughout the European Union.

Meanwhile, the National Highway Traffic Safety Administration (NHTSA) in the United States is more conservative. In an official response regarding the yoke situation, the NTHSA issued a statement saying

At this time, NHTSA cannot determine if the steering wheel meets Federal Motor Vehicle Safety Standards. We will be reaching out to the automaker for more information.

It would be downright amusing if the yoke got the green light for Europe and other markets, but be quashed in Tesla’s home market. The same article in The Sunday Times points out that while the yoke is officially legal in Europe, Tesla will have a bigger problem convincing officials that the new gaming system doesn’t present a safety issue.

The problem it may pose is due to the fact that any occupant in the car, regardless where they sit, will be able to play games on the central screen. This wouldn’t really be a problem if games would only work when the vehicle is stationary, but Tesla has so far not detailed this – for instance, having the front passenger play games on the main screen, while the car is in motion, may be seen as a distraction for the driver and deemed a safety risk.