Home » Car Reviews » Tesla Will Open Superchargers to Other Automakers

Tesla Will Open Superchargers to Other Automakers 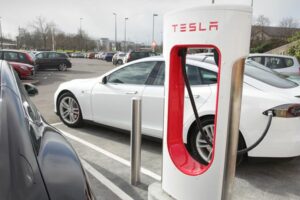 This week Tesla CEO Elon Musk reiterated the company’s plans to let non-Tesla EV owners use the automaker’s Supercharger network. This possibility had actually been mentioned for quite a few years, but is receiving renewed interest as EV sales are starting to tick upward, and as a wave of new EVs gathers on the horizon.

The proprietary network has been active for almost a decade, and now numbers more than 25,000 Superchargers at more than 2,700 stations, with around 1,000 stations in the U.S alone.

“We created our own connector, as there was no standard back then and Tesla was only maker of long-range electric cars. It’s one fairly slim connector for both low & high power charging. That said, we’re making our Supercharger network open to other EVs later this year,” Elon Musk tweeted in response to a question this week.

As the connectors are proprietary, other EVs cannot use the charging cables at the moment and would need an adapter in addition to compatible software.

Musk did not elaborate on whether Tesla would share the chargers with others via signing an agreement with another automaker, or manufacturing adapters for purchase, along with distributing software to use them. The software part would be the more difficult aspect of the plan, as each EV’s computer needs to be able to communicate with the charging station.

In a way it’s surprising that Tesla hasn’t made an effort to open up the Supercharger network earlier as it effectively represents a way for the company to make money, given the decade-long investment into a network no other EVs can use. On the other hand, the network’s availability solely to Teslas is also said to have been a motivating factor in Tesla purchases, as most other automakers lack their own fast-charging network.

At the moment, several automakers with EVs on sale have created apps for owners to allow for easier charging with a number of existing charging providers, so these efforts have been aimed at signing agreements with station builders to enable easier charging. A recent example of this trend is GM’s Ultium Charge 360, encompassing 60,000 plugs from providers like ChargePoint, EV Connect, EVgo, Blink Charging, FLO, SemaConnect and Greenlots. FordPass is another example of this approach.

Volkswagen, on the other hand, had built its own network called Electrify America, open to other automakers.

It remains to be seen just how Tesla plans to allow other EVs to use the Superchargers, namely whether it will be done brand by brand, or whether its own stations’ software would be reconfigured to work with all CCS connector cars. In Europe Teslas use CSS connectors, but at the same time other EVs in Europe still cannot use Supercharger stations, so it’s not just a matter of compatible hardware.

Should Tesla have opened up its Supercharger network sooner, or is this the right time? Let us know in the comments below.