Home » Car Reviews » Tesla Will Not Yet Push For Max Output At Giga Shanghai, Say Sources

Tesla Will Not Yet Push For Max Output At Giga Shanghai, Say Sources 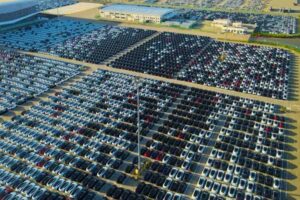 Tesla just completed notable upgrades at its Giga Shanghai factory in China. It had still been in the process of ramping up production prior to the upgrades, and now it has the potential to ramp up much more quickly and efficiently. However, sources familiar with the matter shared that Tesla won’t likely exceed 93 percent production capacity through the end of 2022.

Yahoo! Finance reports that two people with knowledge of the story elected to remain anonymous. They didn’t give any reason for Tesla’s alleged decision to run the factory below its potential capacity. Instead, one source simply said he thought the numbers were below his expectations. Tesla didn’t respond to a request to substantiate the story.

At any rate, the sources explained that Giga Shanghai is capable of producing 8,000 Model 3 sedans and 14,000 Model Y crossovers per week. This is an output that was recently upgraded by some 30 percent. Tesla has been running the factory at full capacity whenever possible, though it was up against lockdowns for a three-week period earlier this year. The restrictions impacted the factory’s capacity for about two months.

The sources added that even though Tesla had plans to continue to push the China factory to full capacity, it’s now decided to produce 20,500 EVs per week, rather than 22,000. The people familiar with the plans said Tesla will build 7,500 Model 3s and 13,000 Model Ys per week in Shanghai through the end of 2022.

Thanks to the ramped-up production, Tesla has been able to significantly reduce delivery wait times in China. Some buyers could get their car in as little as a week, though it depends heavily on the specific configuration. Tesla also continues to encourage potential buyers by offering a rebate if they opt for Tesla Insurance. The offer is good through the end of Q3 2022.

Over the course of the first eight months of 2022, Tesla’s sales in China have soared by almost 60 percent. Keep in mind, Tesla China is also the company’s primary export hub. According to Yahoo! Finance, of the vehicles Tesla manufactures in China, 60 percent are sold domestically, while the other 40 percent are exported to places like Japan, New Zealand, and Australia.