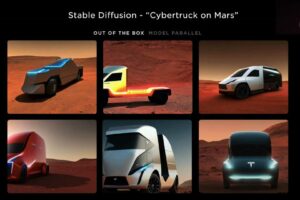 Tesla says it used its artificial intelligence running on its Dojo supercomputer to create the six images featuring Tesla trucks pictured on the surface of the planet Mars. The images were shown during the recent AI Day presentation; the images it produced are interesting and they show the power of such tools, as well as their limitations.

What makes the Dojo supercomputer special is that it doesn’t use third-party components, with all its internals being designed in-house by Tesla. And whereas previously Tesla used Nvidia graphics processors, now even those have been replaced with Tesla’s own chips. The manufacturer developed Dojo especially to reduce the latency that its neural network developers encounter when making updates.

The images shown during AI Day were also processed by a Dojo supercomputer, using an internal software tool that looks similar to others which are publicly available. But you don’t need your own Dojo to get similar, or even better results, as we found out using a text-to-image AI generation platform called Midjourney.

Using simple prompts telling the software what you want to see, it generates unique images that could potentially be enhanced and used in a wide range of applications. Not all results it produces are perfect, but with the correct mix of prompts results can be remarkable, better than the images shown by Tesla.

We wonder if Tesla may even build AI-designed vehicles in the future. The tech isn’t ready today, though, but given the fact that you can already use existing tools to get much better results than even what Tesla showed at AI Day, the day when it will be possible isn’t too far in the future.

This was only a small part of the presentation, though, and just a glimpse into what the Dojo computer can do.