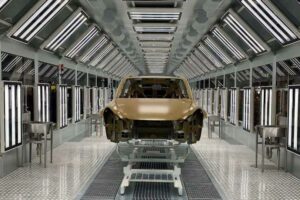 Tesla’s Gigafactory in China, which is also its primary export hub, he been shut down for about three weeks now due to Shanghai’s COVID-19 lockdowns. We learned last week that the factory would likely reopen on April 18, 2022, and as far as we understand, it has. However, there are many important details to report.

Giga Shanghai did reopen yesterday, but it seems production may not have started right away. Some reports yesterday suggested it “has started,” others say it’s “starting,” and still others noted that it would likely be another day, meaning production should be officially underway at this point.

The factory opening situation involved some planning and execution since Tesla has to run the facility with a closed-loop system, at least temporarily. This means factory workers will eat and sleep at Giga Shanghai for the time being to help them comply with the tough lockdown restrictions in China.

According to Bloomberg (The Quint), Tesla is providing a mattress and sleeping bag for each worker. Workers will have to secure a spot on the factory floor to make a bed. The company is also reportedly providing a monetary stipend, three meals per day, entertainment, and an area for showering. Employees will have to undergo COVID-19 testing daily for the first three days. They also have to have their temperature taken twice per day and wash their hands four times per day.

Only workers who have been living in areas of Shanghai that are now deemed “low risk” and have had two COVID-19 vaccines will be able to return to work. According to the memo obtained by Bloomberg, these workers, along with 400 others already restarting work at the factory, will work under the closed-loop plan until May 1, though the timeline could change.

Teslarati notes that these workers will be working 12-hour shifts, six days in a row, with a day off before starting the next cycle. Under normal circumstances, Tesla runs the factory 24 hours a day with three shifts. Reportedly, the typical schedule has workers working four days on and two days off.

Source: Bloomberg (The Quint) via Teslarati