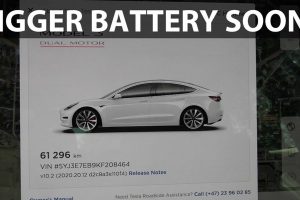 Tesla continues to use software and software updates to race ahead of the competition.

According to a recent report in Vehicle Suggest, which is based on information from a video produced by Tesla owner, fan, and YouTube influencer Bjørn Nyland, Tesla has increased its maximum battery pack size to a whopping 205 kWh in software.

Following a recent software update (2020.20.12), Nyland went through the software information table. Based on the numbers, he discovered that Tesla may have updated its cars’ maximum battery size to 205 kWh.

The situation here is quite complex, especially if you don’t really know anything about EV batteries and state of charge. However, Nyland is well-versed on the subject. He also did some diving and came to some conclusions that make perfect sense. Vehicle Suggest shared:

According to him, if the car has 74% SOC, he should have at least 60-50 kWh remaining. The numbers now have been shifted by one bit forward. Tesla represented a nominal full pack with 10-bit, earlier which was now 11-bit, he explained.”

Confusing perhaps? In the end, through all of his data analysis and hypothesizing, Nyland concluded that Tesla is prepping for the larger battery pack. As the company prepares to bring the Semi, Roadster, and Cybertruck to market, it’s going to need larger battery packs. At this point, the Model S has a ~100-kWh pack and already exceeds 400 miles of range, so an upgrade there isn’t necessary.

Check out the video above and the article linked below for a more detailed explanation. Then, chime in with your thoughts in our comment section below.