Tesla Pushing To Meet Timelines In Berlin Despite Local Pushback 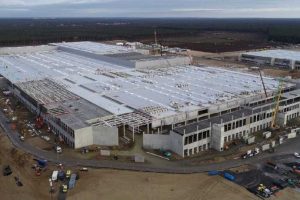 The council has stated that Tesla can continue building the factory up through Model Y trial production.

As anticipated, Tesla has been up against a host of permitting issues and complaints from locals in Berlin as it races to construct its factory. The automaker’s timeline for Model Y production in Germany is fast-approaching, and regardless of opposition, Tesla is continuing to surge forward.

When Tesla first announced plans to build a factory in Germany, skeptics immediately forecasted rough waters. Regulations, paperwork, approvals, and red tape in the country are arguably much more restricting than in other parts of the world. Still, Tesla proved it could build a factory in record time in China, and it went into the Berlin project with the same concept.

Despite many roadblocks along the way, Tesla appears to be making incredible progress on the car factory in Germany. However, starting Model Y production by the middle of this year seems like it will be an epic feat as permits are delayed and conservation groups continue to lobby against Tesla’s efforts.

Tesla is still building Giga-Berlin in the midst of the opposition. Phase 1 will be specific to manufacturing the Model Y, which will be Tesla’s first “made-in-Europe” offering. However, Brandenburg has yet to issue final environmental approval for the project. It may be the end of March or the beginning of April before official approval is granted. Reportedly, the final approval applies to the installation of equipment at the factory.

An article published by German news outlet from Handelsblatt reads (translated and shared via Electrek):

“The final environmental approval for the factory by the state of Brandenburg is still pending. A decision on this is possible until the end of March or beginning of April. The construction of the factory is already advanced, however, because Tesla is building in individual steps through early approval. Most recently, the company received such a permit from the Brandenburg State Office for the Environment for the installation of machines.”

The council has stated that Tesla can continue building the factory up through Model Y trial production. However, based on current approvals, Tesla can’t proceed past trial production until the final approvals are granted. Brandeburg Environment Minister Axel Vogel explained via Teslarati:

“Trial runs are also possible… That is, measures to check the operational reliability such as testing the tightness of tanks and pipelines or the casting and pressing of sample workpieces. There will be no cars on the market from a factory that has not yet been approved.”